Toronto is host to many outdoor events on an annual basis. As you start the planning process, it is important to recognize that your event plays a unique part in the relationship with the community. A quality event can make a difference to the City of Toronto. EventPermits works with the City of Toronto and its partners, in planning safe and successful events that comply with city law.

Toronto’s most prominent landmark is the CN Tower, which stood as the tallest freestanding land structure in the world at 553 meters (1,815 ft). To the surprise of its creators, the tower held the world record for over 30 years.

The Royal Ontario Museum (ROM) is a major museum for world culture and natural history. The Toronto Zoo, one of the largest in the world, is home to over 5,000 animals representing over 460 distinct species. The Art Gallery of Ontario contains a large collection of Canadian, European, African and contemporary artwork. The Gardiner Museum of ceramic art is the only museum in Canada entirely devoted to ceramics, and the Museum’s collection contains more than 2,900 ceramic works from Asia, the Americas, and Europe. The Ontario Science Centre always has new hands-on activities and science displays particularly appealing to children, and the Bata Shoe Museum features many unique exhibitions focused on footwear. The centrally located Textile Museum possesses another niche collection of great quality and interest. The Don Valley Brick Works is a former industrial site, which opened in 1889, and has recently been restored as a park and heritage site. The Canadian National Exhibition is held annually at Exhibition Place, and it is the oldest annual fair in the world. It is Canada’s largest annual fair and the fifth largest in North America, with an average attendance of 1.25 million.

The Yorkville neighborhood is one of Toronto’s most elegant shopping and dining areas. On many occasions, celebrities from all over North America can be spotted in the area, especially during the Toronto International Film Festival. The Toronto Eaton Centre is one of North America’s top shopping destinations, and Toronto’s most popular tourist attraction with over 52 million visitors annually.

Greektown on the Danforth is another one of the major attractions of Toronto, which boasts one of the highest concentrations of restaurants per kilometer in the world. It is also home to the annual “Taste of the Danforth” festival, which attracts over one million people in 2 1/2 days. Toronto is also home to Canada’s most famous “castle” – Casa Loma, the former estate of Sir Henry Pellatt, a prominent Toronto financier, industrialist and military man. Other notable neighborhoods and attractions include The Beaches, the Toronto Islands, Kensington Market, Fort York, and the Hockey Hall of Fame.

Toronto is home to the Toronto Maple Leafs, one of the National Hockey League’s Original Six clubs, and has served as home to the Hockey Hall of Fame since 1958. The city has a rich history of hockey championships. Along with the Maple Leafs’ 13 Stanley Cup titles (second all-time), the Toronto Marlboros and St. Michael’s College School-based Ontario Hockey League teams combined have won a record 12 Memorial Cup titles. The Toronto Marlies of the American Hockey League also play in Toronto at Ricoh Coliseum and are the farm team for the Maple Leafs. They are one of only two teams who are in the same market as their NHL affiliate (the other is the Philadelphia Phantoms, the AHL affiliate of the Philadelphia Flyers).

Toronto is currently home to the only National Basketball Association franchise outside the United States. The Toronto Raptors entered the league in 1995, and have since earned five playoff spots in 13 seasons. The Raptors won the Atlantic Division title in the 2006-07 season, led by star player Chris Bosh. The Toronto Rock is the city’s National Lacrosse League team. They are one of the league’s most successful franchises, winning five Champion’s Cup titles in seven years in the late 1990s and early 2000s, and are currently second all-time in the number of Champion’s Cups won. Both the Raptors and the Rock share the Air Canada Centre with the Maple Leafs. 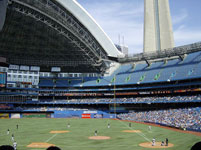 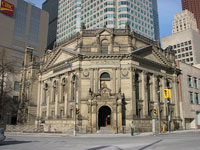 The city is represented in the Canadian Football League by the Toronto Argonauts, who have won a league-leading 15 Grey Cup titles. Toronto played host to the 95th Grey Cup in 2007, the first held in the city since 1992. The city is also home to Major League Baseball’s Toronto Blue Jays, who have won two World Series titles and are currently the only major league baseball team in Canada. Both teams play their home games at the Rogers Centre, in the downtown core.

Toronto is home to the International Bowl, an NCAA sanctioned post-season football game that puts a Mid-American Conference team against a Big East Conference team. Beginning in 2007, the game is scheduled to be played at the Rogers Centre annually in January. In addition, the city has hosted several National Football League exhibition games; Ted Rogers leased the Buffalo Bills from Ralph Wilson for the purposes of having the Bills play eight home games in the city between 2008 and 2012.

In addition to team sports, the city annually hosted Champ Car’s Molson Indy Toronto at Exhibition Place from 1986 to 2007. The race will be revived in 2009 as the Honda Indy Toronto, part of the IndyCar Series schedule. Both thoroughbred and standardbred horseracing events are conducted at Woodbine Racetrack in Rexdale.

Toronto was a candidate city for the 1996 and 2008 Summer Olympics, which were awarded to Atlanta and Beijing respectively. The Canadian Olympic Committee is currently considering a Toronto bid for the 2020 or 2024 Summer Olympics.

Toronto is officially a candidate city to host the 2015 Pan American Games, it was announced by the 2015 Pan Am Games Bid Committee on October 2, 2008.

If you answered yes to any of the above questions, you will need an event permit in the City of Toronto and EventPermits will facilitate all of your needs on your behalf.