Telluride is host to many outdoor events on an annual basis. As you start the planning process, it is important to recognize that your event plays a unique part in the relationship with the community. A quality event can make a difference to the City of Telluride. EventPermits works with the City of Telluride and its partners, in planning safe and successful events that comply with city law.

Telluride and the surrounding area have featured prominently in pop culture. The town of Telluride has served as the backdrop for several television commercials, is home to an international film festival. Telluride is known for its ski resort and slopes during the winter as well as an extensive festival schedule during the summer. 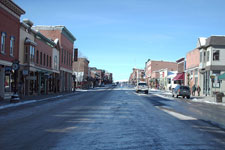 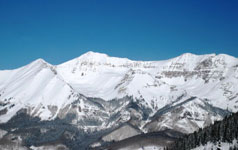 Telluride from the ski slopes

The Telluride Film Festival was started in 1974 by Bill and Stella Pence, Tom Luddy and Jim Card in the town of Telluride, Colorado.

Mining was Telluride’s only industry until 1972, when the first ski lift was installed by Telluride Ski Resort founder Joseph T. Zoline and his Telluride Ski Corporation (Telco). Joe Zoline bought the land for the future resort in 1969 and began to craft the slopes. Along with his mountain manager, Telluride native Bill “Sr.” Mahoney, they slowly and thoughtfully put together a plan for sustained development of Telluride and the region. As mining phased out and a new service industry phased in, the local population changed sharply. Mining families fled Telluride to settle in places like Moab, Utah, where uranium mining offered hope of continued employment. Mining families were replaced by what locals referred to as “hippies,” young people with a 1960s worldview that frequently clashed with the values of Telluride’s old timers. These newcomers were characterized as being idle trust funders who were drawn to the town for a casual life style and outdoor excitements such as hang gliding, mountain climbing, and kayaking.

The new population was initially anti-growth and rallied against any economic expansion, including growth due to tourism and skiing. At one point, a serious effort was made to ban cars from the city limits and force visitors to use horse drawn carts. Success did not come overnight for Telluride in this environment. The seventies were a time of fluctuating snowfalls and economic recession. However, the town’s now famous music and film festivals were immune from anti-growth criticism and flourished. These festivals exposed hundreds of thousands to the grandeur of the valley for the first time and created iconic associations with elite entertainers. Meanwhile ski area founder Joe Zoline worked hard to put Telluride on the map, developing one of the best mountains in North America for expert skiers and creating infrastructure for tourism that respected Telluride’s need to stay small and beautiful.

As the final ore carts were rolling out of the Pandora mine, tourists began to discover Telluride for its magnificent views, expert skiing, and famous autumn color changes. After the brutal snow drought of 1976, which nearly wiped out the embryonic ski and lodging industry the town started to, rebound economically. In 1978, a stake of the ski area was purchased by Ron Allred and his partner Jim Wells to form the Telluride Company. The new owners expanded the infrastructure that Zoline had put into place by adding a gondola connecting the Town of Telluride with the Mountain Village.

During the 1980s, Telluride developed a reputation for being “Colorado’s best kept secret,” which paradoxically made it one of the more well-known resort communities. Wealthy skiers flocked to the world-class mountain all winter and sightseers kept hotel rooms full all summer. In the 1980s, Telluride also became notorious in the drug counter culture for being a drop point for Mexican smugglers and a favorite place for wealthy importers to enjoy some downtime. The town was even featured in the hit song by Glenn Frey from Miami Vice, “Smugglers Blues.” For a while the modern Telluride was living up to its Wild West history. This type of attention, as it turned out, was just what the town needed to differentiate it from Aspen. The festivals combined with Telluride’s bad-boy town image attracted celebrities like Tom Cruise, Oprah Winfrey, and Oliver Stone. By the mid 1990s, Telluride had shed both its mining personality and drug image to establish itself as a premier resort town balancing modern culture with fascinating western history. In 2003, Prospect Bowl, an extension to the ski area opened, providing the resort with many new trails and runs. In 2007-08, the ski area opened some of the most extreme, in-bound, hike-to terrain in the country. Most lifts in the area are high-speed quad chairs capable of holding four passengers. The highest lift on the mountain reaches an altitude of 12,255 feet.

If you answered yes to any of the above questions, you will need an event permit in the City of Telluride and EventPermits will facilitate all of your needs on your behalf.