St. Louis is host to many outdoor events on an annual basis. As you start the planning process, it is important to recognize that your event plays a unique part in the relationship with the community. A quality event can make a difference to the City of St. Louis. EventPermits works with the City of St. Louis and its partners, in planning safe and successful events that comply with city law.

There are many museums and attractions in the city. The St. Louis Art Museum, located in the City’s premier park, Forest Park, and dating from the 1904 World’s Fair, houses an impressive array of modern art and ancient artifacts, with an extensive collection of master works of several centuries, including paintings by Rembrandt, Van Gogh, Pissarro, Picasso, and many others. Forest Park is bigger than New York’s Central Park, and it also is home to the St. Louis Zoo, the Muny, and many other attractions. The privately owned City Museum offers a variety of interesting exhibits, including several large faux caves and a huge outdoor playground. It also serves as a meeting point for St. Louis’s young arts scene.

The Pulitzer Foundation for the Arts, located in Grand Center, is an arts institution in a world-renowned building designed by the Pritzker Prize-winning architect, Tadao Ando. Also located in Grand Center is the Contemporary Art Museum St. Louis, this non-collecting museum is recognized nationally for the quality of its exhibitions and education programs. The Eugene Field House, located in downtown St. Louis, is a museum dedicated to the distinguished children’s author. The Missouri History Museum presents exhibits and programs on a variety of topics including the 1904 World’s Fair, and a comprehensive exhibit on Lewis and Clark’s voyage exploring the Louisiana Purchase. The Fox Theatre, originally one of many movie theatres along Grand Boulevard, is now a newly restored theater featuring a Byzantine facade and Oriental decor. The Fox Theatre presents a Broadway Series in addition to concerts. The St. Louis Union Station is a popular tourist attraction with retail shops and a luxury hotel. 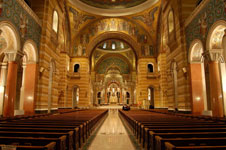 There are several notable churches in the city, including the Cathedral Basilica of St. Louis (more commonly known as “the New Cathedral”), a large Roman Catholic cathedral designed in the Byzantine and Romanesque styles. It is the mother church and seat of the Roman Catholic Archdiocese of Saint Louis, the principal diocese of Missouri. The interior is decorated with mosaics, the largest mosaic collection in the world.

The Basilica of St. Louis, King of France (1834) (more commonly known as the “Old Cathedral”) is the oldest Roman Catholic cathedral west of the Mississippi River. The Old Cathedral is located adjacent to the Jefferson National Expansion Memorial. Also notable is the abbey church of Saint Louis Abbey, whose distinctive architectural style garnered multiple awards at the time of its completion.

The Gateway Arch, part of the Memorial, is arguably the city’s best-known landmark, as well as a popular tourist site. This Memorial commemorates the acquisition and settlement by the citizens of the United States of America of all of the lands west of the Mississippi River that are part of the nation today. The Arch, and the entire 91 acres (370,000 m2) of the Jefferson National Expansion Memorial park, occupy the exact location of the original French village of St. Louis (1764-1804). Unfortunately, no buildings from that era exist today.

The Hill is an historically Italian neighborhood where many of the area’s best Italian restaurants can be found. The Hill was the home of Yogi Berra, Joe Garagiola, and many other noted athletes.

Forest Park offers many of St. Louis’s most popular attractions: the Saint Louis Zoological Park; the Municipal Theater (also known as The Muny, the largest and oldest outdoor musical theater in the United States); the St. Louis Science Center (with its architecturally distinctive McDonnell Planetarium); the Saint Louis Art Museum; the Missouri History Museum; several lakes, and scenic open areas. Forest Park completed a multi-million dollar renovation in 2004 for the centennial of the St. Louis World’s Fair. The Zoo, Art Museum, and Science Center are all world-class institutions. The Zoo-Museum Tax District provides operating funds, so admission is free to them and the History Museum.

The Saint Louis Zoological Park, one of the oldest and largest free-admission zoos in the country, is home to an Insectarium and the Prairie Village. The St. Louis Zoo is the most visited zoo in the United States, having surpassed the San Diego Zoo in popularity. It boasts many exhibits with animal-friendly habitats. The zoo is located in Forest Park, adjacent to the St. Louis Art Museum. 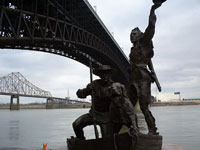 Lewis and Clark sculpture on the riverfront 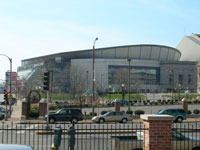 The St. Louis Cardinals Hall of Fame Museum is located near Busch Stadium in downtown St. Louis. Laclede’s Landing, located on the Mississippi Riverfront directly north of the historic Eads Bridge, is popular for its restaurants and nightclubs.

On the Riverfront two sculptural groups have been designated a National Lewis and Clark site by the National Park Service. This includes a twice life-sized grouping of Lewis and Clark on the St. Louis Riverfront which commemorated the final celebration of the bicentennial of the expedition. These sculptures were done by Harry Weber.

The Lemp Mansion, home of the ill-fated Lemp family, brewers of Falstaff Beer and others, is considered one of the most haunted places in the nation. It is open to the public as a restaurant, murder-mystery dinner theater, and bed and breakfast.

Enthusiastic and knowledgeable fans give the city a reputation as “a top-notch sports town” and “Baseball City USA.” The Sporting News rated St. Louis the nation’s “Best Sports City” in 2000. The St. Louis Cardinals, one of the oldest franchises in Major League Baseball, have won 10 World Championships, which is second all-time only to the New York Yankees, who have won 26 titles. 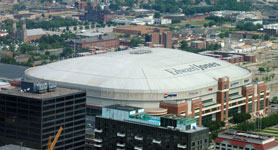 In 2006, the College Cup was played at Hermann Stadium on the campus of Saint Louis University. The Scottrade Center hosted the 2007 Frozen Four college ice hockey tournament on April 5 and April 7, 2007. The Scottrade Center also hosts the annual “Braggin’ Rights” game, a men’s college basketball rivalry game between the universities of Illinois and Missouri. St. Louis is roughly equidistant from the two campuses.

The 2009 Major League Baseball All-Star Game will be the 80th midseason exhibition between the all-stars of the American League (AL) and the National League (NL), the two leagues comprising Major League Baseball. The game will be held on July 14, 2009, at Busch Stadium. The game will be the first all star game held in St. Louis since 1966. It will be the seventh All-Star Game to determine home field advantage at the 2009 World Series, with the American League winning all six games to date under this format. Currently, the National League leads, 40-37-2, but has not won since 1996.

If you answered yes to any of the above questions, you will need an event permit in the City of St. Louis and EventPermits will facilitate all of your needs on your behalf.