Because of its agreeable weather, Santa Monica had become a famed resort town by the early 20th century. The city has experienced a boom since the late 1980s through the revitalization of its downtown core with significant job growth and increased tourism. 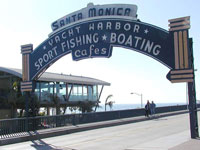 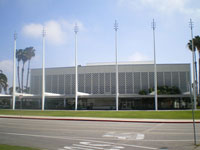 The Santa Monica Hippodrome (carousel) is a National Historic Landmark. It sits on the Santa Monica Pier, which was built in 1909. The La Monica Ballroom on the pier was once the largest ballroom in the US, and the source for many New Year’s Eve national network broadcasts. The Santa Monica Civic Auditorium was an important music venue for several decades and hosted the Academy Awards in the 1960s. McCabe’s Guitar Shop is still a leading acoustic performance space, as well as retail outlet. Bergamot Station is a city-owned art gallery compound that includes the Santa Monica Museum of Art. The city is also home to the Santa Monica Heritage Museum. 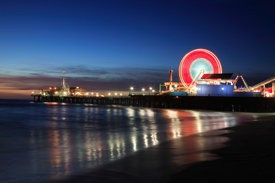 Santa Monica is the home of the Third Street Promenade, a major outdoor pedestrian-oriented shopping district that stretches for three blocks between Wilshire Blvd. and Broadway Blvd. Third Street has been closed for those three blocks and converted to a pedestrians-only stretch to allow people to congregate shop and enjoy street performers.

The oldest movie theater in the city is the Majestic. Also known as, the Mayfair Theatre, the theater that opened in 1912 has been closed since the 1994 Northridge earthquake. The Aero Theater (now operated by the American Cinematheque and Criterion Theater were built in the 1930s and still show movies. The Santa Monica Promenade alone supports more than a dozen movie screens.

Palisades Park stretches out along the crumbling bluffs overlooking the Pacific and is a favorite walking area to view the ocean. It features a camera obscura. For 48 years, local churches and the Police Association assembled a 12-tableau story of Christmas in Palisades Park. The sheds were open on the street side, protected by chain-link fencing. Inside were dioramas of the Holy Family made from store mannequins. In 2001, the city decided to end the practice of allowing private groups to place displays in city parks, but in 2004 the Christmas displays returned.

Locals and tourists alike have enjoyed the Santa Monica Rugby Club since 1972. The club has been very successful since its conception, most recently winning back-to-back national championships in 2005 and 2006. Santa Monica defeated the Boston Irish Wolfhounds 57-19 in the Division 1 final, convincingly claiming its second consecutive American title on June 4, 2006, in San Diego. They offer Men’s, Women’s and a thriving children’s programs. The club recently joined the Rugby Super League.

Santa Monica is an international mecca for skateboarding culture.

If you answered yes to any of the above questions, you will need an event permit in the City of Santa Monica and EventPermits will facilitate all of your needs on your behalf.