Today, San Francisco is a popular international tourist destination renowned for its chilly summer fog, steep rolling hills, eclectic mix of Victorian and modern architecture and its famous landmarks, including the Golden Gate Bridge, the cable cars, and Chinatown. 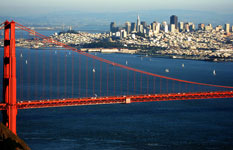 San Francisco from the Marin Headlands 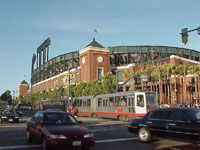 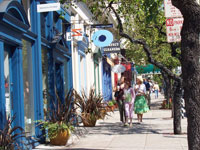 San Francisco is characterized by a high standard of living. The great wealth and opportunity generated by the Internet revolution continues to draw many highly educated and high-income workers and residents to San Francisco. Lower-income neighborhoods consequently have become increasingly gentrified, and many of the city’s traditional business and industrial districts have experienced a renaissance driven by the redevelopment of the Embarcadero, including the neighborhoods South Beach and Mission Bay. The city’s property values and household income have escalated to among the highest in the nation, allowing the city to support a large restaurant and entertainment infrastructure. Because the cost of living in San Francisco is exceptionally high, many middle class families have decided they can no longer afford to live within the city and have left.

Although the centralized commerce and shopping districts of the Financial District and the area around Union Square are well known around the world, San Francisco is also characterized by its culturally rich streetscapes featuring mixed-use neighborhoods anchored around central commercial corridors to which residents and visitors alike can walk. Because of these characteristics, San Francisco was rated “most walkable” city by the website Walkscore.com. Many neighborhoods feature a mix of businesses, restaurants and venues catering to the daily needs of the community while also drawing in visitors. Some neighborhoods are dotted with boutiques, cafes and nightlife, such as Union Street in Cow Hollow, and 24th Street in Noe Valley. Others are less so, such as Irving Street in the Sunset, or Mission Street in the Mission. This approach especially has influenced the continuing South of Market neighborhood redevelopment, with businesses and neighborhood services rising alongside high-rise residences.

The international character San Francisco has fostered since its founding is continued today by large numbers of immigrants from Asia and Latin America. With 39 percent of its residents born overseas, San Francisco has numerous neighborhoods filled with businesses and civic institutions catering to new arrivals. In particular, the arrival of many ethnic Chinese, which accelerated beginning in the 1970s, has complemented the long-established community historically based in Chinatown throughout the city and has transformed the annual Chinese New Year Parade into the largest event of its kind outside China.

Following the arrival of writers and artists of the 1950s-who established the modern coffeehouse culture-and the social upheavals of the 1960s, San Francisco became an epicenter of liberal activism, with Democrats and Greens dominating city politics. Indeed, San Franciscans have not provided a Republican presidential candidate more than 20 percent of the vote since the 1988 election. The city’s large gay and lesbian population has created and sustained a politically and culturally active community over many decades, developing a powerful presence in San Francisco’s civic life. A popular destination for gay and lesbian tourists, the city hosts San Francisco Pride, an annual parade and festival. 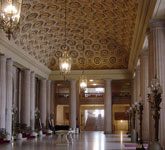 The Fillmore is a music venue located in the Western Addition. It is the second incarnation of the historic venue that gained fame in the 1960s under concert promoter Bill Graham, housing the stage where now-famous musicians such as the Grateful Dead, Janis Joplin and Jefferson Airplane first performed, fostering the San Francisco Sound. Beach Blanket Babylon is a zany musical revue and a civic institution that has performed to sold-out crowds in North Beach since 1974.

The American Conservatory Theater (A.C.T.) has been a leading force in Bay Area performing arts since its arrival in San Francisco in 1967, regularly staging original productions. San Francisco frequently hosts national touring productions of Broadway theatre shows in a number of vintage 1920s-era venues in the Theater District including the Curran, Orpheum, and Golden Gate Theatres. 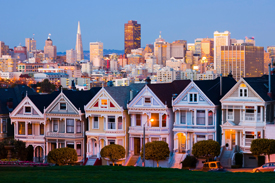 The Museum of Modern Art (SFMOMA) houses 20th century and contemporary works of art. It moved to its iconic building in the South of Market neighborhood in 1995 and now attracts more than 600,000 visitors annually. The Palace of the Legion of Honor holds primarily European antiquities and works of art at its Lincoln Park building modeled after its Parisian namesake. It is administered by Fine Arts Museums of San Francisco, which also operates the de Young Museum in Golden Gate Park. The de Young’s collection features American decorative pieces and anthropological holdings from Africa, Oceania and the Americas. Prior to construction of its current copper-clad structure, completed in 2005, the de Young also housed the Asian Art Museum with artifacts from over 6,000 years of history across Asia, moved into the former public library next to Civic Center in 2003.

Opposite the Music Concourse from the de Young stands the California Academy of Sciences, a natural history museum that also hosts the Morrison Planetarium and Steinhart Aquarium. Its current structure, featuring a living roof, is an example of sustainable architecture and opened in 2008. The Palace of Fine Arts, built originally for the 1915 Panama-Pacific Exposition, has since 1969 housed the Exploratorium, an interactive science museum.

The San Francisco 49ers of the National Football League (NFL) are the longest-tenured major professional sports franchise in the city. The team began play in 1946 as an All-America Football Conference (AAFC) league charter member, moved to the NFL in 1950 and into Candlestick Park in 1971. The 49ers won five Super Bowl titles in the 1980s and 1990s behind Coach Bill Walsh and stars Joe Montana, Steve Young, Ronnie Lott, and Jerry Rice.

Major League Baseball’s San Francisco Giants left New York for California prior to the 1958 season. Though boasting stars such as Willie Mays, Willie McCovey and Barry Bonds, the club has yet to win the World Series while based in San Francisco. The Oakland Athletics swept the Giants in the 1989 World Series, after Game 3 in San Francisco was infamously pre-empted by the Loma Prieta earthquake. The Giants play at AT&T Park that was opened in 2000, a cornerstone project of the South Beach and Mission Bay redevelopment. 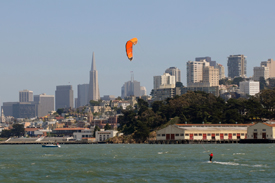 At the collegiate level, the Dons of the University of San Francisco compete in NCAA Division I, where Bill Russell guided the program to basketball championships in 1955 and 1956. The San Francisco State Gators and the Academy of Art University Urban Knights compete in Division II. AT&T Park hosts college football’s annual Emerald Bowl.

The Bay to Breakers footrace, held annually since 1912, is best known for colorful costumes and a celebratory community spirit. The San Francisco Marathon is an annual event that attracts more than 7,000 participants. The Escape from Alcatraz triathlon has taken place since 1980 and attracted over 2,000 top professional and amateur triathletes for its annual race. The Olympic Club, founded in 1860, is the oldest athletic club in the United States. Its private golf course, situated on the border with Daly City, has hosted the U. S. Open on four occasions. The public Harding Park Golf Course is an occasional stop on the PGA Tour.

With an ideal climate for outdoor activities, San Francisco has ample resources and opportunities for amateur and participatory sports and recreation. There are more than 200 miles (320 km) of bicycle paths, lanes and bike routes in the city, and the Embarcadero and Marina Green are favored sites for in-line skating. Extensive public tennis facilities are available in Golden Gate Park and Dolores Park, as well as at smaller neighborhood courts throughout the city. Boating, sailing, windsurfing and kitesurfing are among the popular activities on San Francisco Bay, and the city maintains a yacht harbor in the Marina District. San Francisco residents have often ranked among the fittest in the U.S.

If you answered yes to any of the above questions, you will need an event permit in the City of San Francisco and EventPermits will facilitate all of your needs on your behalf.