Phoenix is host to many outdoor events on an annual basis. As you start the planning process, it is important to recognize that your event plays a unique part in the relationship with the community. A quality event can make a difference to the City of Phoenix. EventPermits works with the City of Phoenix and its partners, in planning safe and successful events that comply with city law.

The early economy of Phoenix was primarily agricultural, dependent mainly on cotton and citrus farming. In the last two decades, the economy has diversified as swiftly as the population has grown. As the state capital of Arizona, many residents in the area are employed by the government. Arizona State University has also enhanced the area’s population through education and its growing research capabilities. Numerous high-tech and telecommunications companies have also recently relocated to the area. Due to the warm climate in winter, Phoenix benefits greatly from seasonal tourism and recreation, and the golf industry.

Phoenix is currently home to seven Fortune 1000 companies: waste management company Allied Waste, electronics corporation Avnet, Apollo Group (which operates the University of Phoenix), mining company Freeport-McMoRan (recently merged with Phoenix based Phelps Dodge), retailer PetSmart, energy supplier Pinnacle West and retailer CSK Auto. Honeywell’s Aerospace division is headquartered in Phoenix, and the valley hosts many of their avionics and mechanical facilities. Intel has one of their largest sites here, employing about 10,000 employees and 3 chip manufacturing Fab, including the $3 billion state-of-the-art 300 mm and 45 nm Fab 32. American Express hosts their financial transactions, customer information, and their entire website in Phoenix. The city is also home to the headquarters of U-HAUL International, a rental company and moving supply store, as well Best Western, a hotel chain.

The military has a significant presence in Phoenix with Luke Air Force Base located in the western suburbs. At its height, in the 1940s, the Phoenix area had three military bases: Luke Field (still in use), Falcon Field, and Williams Air Force Base (now Phoenix-Mesa Gateway Airport), with numerous auxiliary air fields located throughout the region. 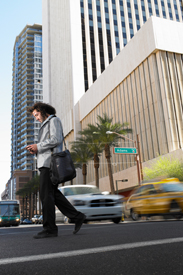 Several music venues take place around Arizona, but primarily in and around downtown Phoenix and in Scottsdale. One such venue is the Phoenix Symphony Hall, where performances from groups such as Arizona Opera and Ballet Arizona often occur. Another venue is the Orpheum Theatre (Phoenix) which is home to the Phoenix Metropolitan Opera. Concerts also regularly make stops in the area. Venues for concerts include the US Airways Center and the Dodge Theater in downtown Phoenix, Jobing.com Arena in Glendale. Since 2002, Phoenix has also seen a rapid growth in local arts through The Artlink Program. Several Smaller theatres including Trunk Space, Space 55 and Modified Arts support regular independent musical and theatre performances.

Several museums are scattered around the valley including the Phoenix Art Museum. One of the most well-known museums in the area is the Heard Museum just north of downtown. It has over 130,000 square feet (12,000 m) of gallery, classroom and performance space. Some of the signature exhibits include a full Navajo Hogan, the Mareen Allen Nichols Collection containing 260 pieces of contemporary jewelry, the Barry Goldwater Collection of 437 historic Hopi kachina dolls, and an exhibit on the 19th century boarding school experiences of Native Americans. The Heard Museum attracts about 250,000 visitors a year.

Other notable museums in the city include the Arizona Science Center, Hall of Flame Firefighting Museum, Phoenix Museum of History, the Phoenix Zoo, and the Pueblo Grande Museum and Cultural Park.

Phoenix is home to several professional sports franchises, including representatives of all four major professional sports leagues in the U.S. – although only two of these teams actually carry the city name and play within the city limits. The first major franchise was the Phoenix Suns of the National Basketball Association (NBA), which started play in 1968. In 1997, the Phoenix Mercury was one of the original eight teams to launch the Women’s National Basketball Association (WNBA). Both teams play at U.S. Airways Center. The U.S. Airways Center was the setting for both the 1995 and the 2009 NBA All-Star Games. The Phoenix Flame of the International Basketball League began play in the spring of 2007. They play at the Arizona Veterans Memorial Coliseum. 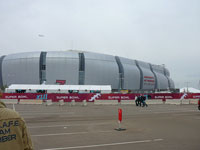 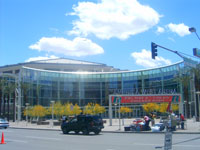 The Arizona Cardinals moved to Phoenix from St. Louis, Missouri in 1988 and currently play in the Western Division of the National Football League’s National Football Conference. The team, however, has never played in the city itself; they played at Sun Devil Stadium on the campus of Arizona State University in nearby Tempe until 2006. Sun Devil Stadium held Super Bowl XXX in 1996 when the Dallas Cowboys defeated the Pittsburgh Steelers. The Cardinals now play at University of Phoenix Stadium in west suburban Glendale. University of Phoenix Stadium hosted Super Bowl XLII on February 3, 2008, in which the New York Giants defeated the New England Patriots. It is also the home of the annual Tostitos Fiesta Bowl, a college football bowl game that is part of the Bowl Championship Series (BCS).

Phoenix also has an arena football team, the Arizona Rattlers of the Arena Football League. Games are played at US Airways Center downtown.

The Phoenix Coyotes of the National Hockey League moved to the area in 1996; they were formerly the Winnipeg Jets franchise. They play at Jobing.com Arena, adjacent to University of Phoenix Stadium in Glendale. The city also boasts a minor league hockey team, the Phoenix Roadrunners of the ECHL, who play at the U.S. Airways Center. This makes Phoenix one of the few cities where minor and major league teams in the same sport coexist.

The Arizona Diamondbacks of Major League Baseball (National League West Division) began play as an expansion team in 1998. The team plays at Chase Field (downtown). In 2001, the Diamondbacks defeated the New York Yankees 4 games to 3 in the World Series, becoming not only the city’s first professional sports franchise to win a national championship while located in Arizona, but also one of the youngest expansion franchise in U.S. professional sports to ever win a championship.

Additionally, due to the favorable climate, nine Major League Baseball teams conduct spring training in the metro area, as well as nearby Tucson. These teams are collectively known as the Cactus League.

Phoenix has also hosted the Insight Bowl at Chase Field until 2005, after which it moved to nearby Tempe, as well as several major professional golf events, including the LPGA’s Safeway International and The Tradition of the Champions Tour. Phoenix was originally scheduled to host the 2006 NHL All-Star Game, but it was canceled due to the 2006 Winter Olympics (the recently adopted NHL collective bargaining agreement prohibits the All-Star Game to be held during Olympic years). Instead, Phoenix will host the 2009 All-Star Game.

Phoenix is one of the three cities that hosts the annual Rock ‘n’ Roll Arizona Marathon in January.

As of 2007 Phoenix is the largest North American city not to contain a team in any of the four tiers of professional soccer. There is a plan to try to bring Major League Soccer to the city in the shape of the proposed team Phoenix Rising. Phoenix is currently one of thirteen cities across the United States and Canada that are aiming to claim one of two places scheduled to be made available through expansion before 2011. The plan currently includes a suggested $150 million 25,000-seat soccer specific stadium with a retractable roof.

If you answered yes to any of the above questions, you will need an event permit in the City of Phoenix and EventPermits will facilitate all of your needs on your behalf.