New Orleans is host to many outdoor events on an annual basis. As you start the planning process, it is important to recognize that your event plays a unique part in the relationship with the community. A quality event can make a difference to the City of New Orleans. EventPermits works with the City of New Orleans and its partners, in planning safe and successful events that comply with city law.

According to current travel guides, New Orleans is one of the top ten most visited cities in the United States; 10.1 million visitors came to New Orleans in 2004, and the city was on pace to break that level of visitation in 2005. Prior to Katrina there were 265 hotels with 38,338 rooms in the Greater New Orleans Area. In May 2007, there were over 140 hotels and motels in operation with over 31,000 rooms. 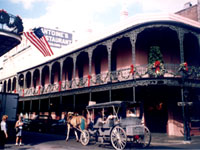 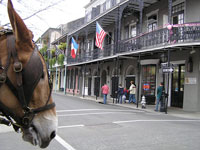 The French Quarter (known locally as “the Quarter” or Vieux Carre), which dates from the French and Spanish eras and is bounded by the Mississippi River, Rampart Street, Canal Street, and Esplanade Avenue, contains many popular hotels, bars, and nightclubs. Notable tourist attractions in the Quarter include Bourbon Street, Jackson Square, St. Louis Cathedral, the French Market (including Cafe du Monde, famous for cafe au lait and beignets), and Preservation Hall. To tour the port, one can ride the Natchez, an authentic steamboat with a calliope which cruises the Mississippi the length of the city twice daily. The city’s many beautiful cemeteries and their distinct above-ground tombs are often attractions in themselves, the oldest and most famous of which, Saint Louis Cemetery, greatly resembles Pere Lachaise in Paris.

Also located in the French Quarter is the old New Orleans Mint, a former branch of the United States Mint which now operates as a museum, and The Historic New Orleans Collection, a museum and research center housing art and artifacts relating to the history of New Orleans and the Gulf South. The National World War II Museum, opened in the Warehouse District in 2000 as the “National D-Day Museum,”, is dedicated to providing information and materials related to the allied invasion of Normandy, France. Nearby Confederate Memorial Hall, the oldest continually operating museum in Louisiana (although under renovation since Katrina), contains the second-largest collection of Confederate memorabilia in the world. Art museums in the city include the Contemporary Arts Center, the New Orleans Museum of Art (NOMA) in City Park, and the Ogden Museum of Southern Art.

New Orleans also boasts a decidedly natural side. It is home to the Audubon Nature Institute (which consists of Audubon Park, the Audubon Zoo, the Aquarium of the Americas, and the Audubon Insectarium), as well as gardens that include Longue Vue House and Gardens and the New Orleans Botanical Garden. City Park, one of the country’s most expansive and visited urban parks, has one of the largest (if not the largest) stands of oak trees in the world.

There are also various points of interest in the surrounding areas. Many wetlands are in close proximity to the city, including Honey Island Swamp. Chalmette Battlefield and National Cemetery, located just south of the city, is the site of the 1815 Battle of New Orleans.

If you answered yes to any of the above questions, you will need an event permit in the City of New Orleans and EventPermits will facilitate all of your needs on your behalf.