Milwaukee is host to many outdoor events on an annual basis. As you start the planning process, it is important to recognize that your event plays a unique part in the relationship with the community. A quality event can make a difference to the City of Milwaukee. EventPermits works with the City of Milwaukee and its partners, in planning safe and successful events that comply with city law.

Milwaukee is a popular tourist destination in the Midwest. Known as ‘A Genuine American City’, Milwaukee combines the friendliness of the Midwest with the cultural attractions and amenities of a bigger city. It is a popular venue for Lake Michigan sailing, windsurfing, kitesurfing, ethnic dining, and cultural festivals. Milwaukee has been recognized for its museums, fine dining and hotels, professional sports, performing arts, gardens and parks, and Milwaukee County Zoological Gardens. 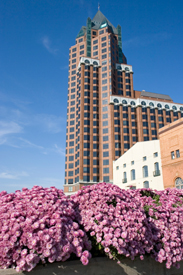 Milwaukee, “A Great Place on a Great Lake” has also advertised itself as the “City of Festivals,” The Milwaukee metropolitan area hosts the Wisconsin State Fair, as well as an annual lakefront fair called Summerfest. Listed in the Guinness Book of World Records as the largest music festival in the world, Summerfest attracts around 1,000,000 visitors each year to its eleven stages.

Milwaukee is also home to a variety of primarily ethnically themed festivals throughout the summer. Held generally on the lakefront Summerfest grounds, these festivals span several days (typically Friday plus the weekend) and celebrate Milwaukee’s history and diversity. In 2008 Riversplash, which markets itself as ‘the official opening of summer’, kicks off festival season on the last weekend of May. Festivals for the LGBT (PrideFest) and Polish (Polish Fest) communities follow in June. Summerfest spans 11 days at the end of June and beginning of July. There are French (Bastille Days), Greek, Italian (Festa Italiana) and German (German Fest) festivals in July. The African, Arab, Irish, Mexican, and American Indian events wrap it up from August through September.

Milwaukee County is known for its well-developed park system. The “Grand Necklace of Parks”, designed by Frederick Law Olmsted, designer of New York’s Central Park, includes Lake Park, River Park (now Riverside Park) and West Park (now Washington Park). Milwaukee County Parks offer facilities for sunbathing, picnics, grilling, disc golf, and ice skating. Milwaukee has over 140 parks with over 15,000 acres (61 km2) of parks and parkways. Early commissioners conceived of a park system that would form a “green belt”, or series of scenic drives and parks encircling the county. Parks were located in outlying areas to allow for population expansion. Commissioners selected land not only for its natural beauty and interest, but also for its fitness for various forms of active and passive recreation. 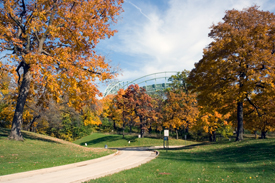 Henry Maier Festival Park (Summerfest Grounds) The Henry Maier Festival Park was built on Milwaukee’s former Maitland Air Field on Lake Michigan in the Milwaukee Harbor. The grounds were named after Milwaukee Mayor Henry Maier, and host many festivals. Summerfest, most well-known of the festivals, offers entertainment in late June and early July each year. This international festival features top and local musicians and performers from James Taylor to Metallica, and is one of the largest musical festivals in the world. Additional festivals held during the summer months celebrate Milwaukee’s cultural diversity.

Panoramic View of Milwaukee circa 1898

Milwaukee has a rich history of involvement in professional and sports, going back to the 19th century. Currently, its major sports teams include:

Throughout the sports world, Milwaukee is perhaps best known for its tradition of tailgating before Brewers baseball games. The Brewers made their first post-season appearance in 1981 and won the American League pennant in 1982. In 1998, they became the only Major League team in history to switch leagues, doing so to accommodate the expansion franchises of the Arizona Diamondbacks and Tampa Bay Devil Rays. They also have the distinction of being the only team to have played in four of the six current Major League divisions.

The Bucks won the 1971 NBA Championship, a mere three years after joining the league. They made it back to the Finals in 1974, but soon developed a reputation as “next year’s champions,” winning at least one playoff series for the next 15 years, but still having yet to return to the Finals.

The Wave are the longest continuously-running professional soccer operation in North America. They have also been one of the most successful, having captured four league championships in the past nine years.

Milwaukee is also the host city of The Point Premium Root Beer International Cycling Classic, presented by Time Warner Cable, which includes the men’s and women’s Superweek Pro Tour races, featuring top professional and elite amateur cyclists and teams from across the U.S. and more than 20 foreign countries.

Between 1933 and 1994 the Green Bay Packers of the NFL split their home games between Green Bay in north Wisconsin and Milwaukee. The Packers are Wisconsin’s most successful sports team and one of the greatest in NFL history.

In addition to professional sports, Milwaukee is home to a number of competitive teams, clubs and leagues at the amateur, college and semi-pro levels.

Under the leadership of Al McGuire, Marquette’s men’s basketball team became a national powerhouse in the 1970s, capturing the NIT Championship in 1970, and the NCAA Championship in 1977. Not only was the ’77 championship McGuire’s last game, but Marquette remains the last independent school to win the title. It is also the last major sports championship won by a Milwaukee sports team.

Led by current NBA star Dwyane Wade, Marquette returned to the Final Four in 2003, but was ousted by Kansas in the semi-finals.

UW-Milwaukee made its first post-season appearance in men’s basketball that same year, under the tutelage of current Tennessee head coach Bruce Pearl. Although they lost at the buzzer to Notre Dame in the first round, they would make their first NIT appearance the following year. In 2005, UWM had its most successful year ever, winning both the Horizon League regular season and tournament championships. They would go on to upset Alabama in the first round of the NCAA tournament before shocking then Big East powerhouse Boston College on its way to the Sweet 16. So much of an impression had the team made that sportswriters shied away from calling their defeat of sixth-seeded Oklahoma in the 2006 Tournament an “upset,” believing UWM may have actually been the better team.

Starting with the 2007-08 season, the Marquette and UWM men’s basketball teams will rekindle their annual rivalry game which has been dormant since 1998. The two schools have always shared annual and heated rivalries in all other common NCAA sports.

UWM’s men’s and women’s soccer teams regularly attain national rankings, and the school is also home to the only Division I baseball team in Wisconsin.

The Milwaukee Bavarians/Bavarian Soccer Club is one of the oldest and most successful amateur soccer clubs in the United States, having captured the National Amateur Cup on two occasions. They play at the fourth level of the American Soccer Pyramid.

If you answered yes to any of the above questions, you will need an event permit in the City of Milwaukee and EventPermits will facilitate all of your needs on your behalf.