Miami is host to many outdoor events on an annual basis. As you start the planning process, it is important to recognize that your event plays a unique part in the relationship with the community. A quality event can make a difference to the City of Miami. EventPermits works with the City of Miami and its partners, in planning safe and successful events that comply with city law.

Miami is home to many entertainment venues, theaters, museums, parks and performing arts centers. The newest addition to the Miami arts scene is the Adrienne Arsht Center for the Performing Arts, the second-largest performing arts center in the United States after the Lincoln Center in New York City, and is the home of the Florida Grand Opera. In it, is the Ziff Ballet Opera House, the center’s largest venue, the Knight Concert Hall, the Carnival Studio Theater and the Peacock Rehearsal Studio. The center attracts many large-scale operas, ballets, concerts, and musicals from around the world and is Florida’s grandest performing arts center. Other performing arts venues in Miami include the Gusman Center for the Performing Arts, Coconut Grove Playhouse, Colony Theatre, Lincoln Theatre, New World Symphony House, Actor’s Playhouse at the Miracle Theatre, Jackie Gleason Theatre, Manuel Artime Theater, Ring Theatre, Playground Theatre, Wertheim Performing Arts Center, the Fair Expo Center and the Bayfront Park Amphitheater for outdoor music events. 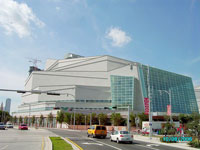 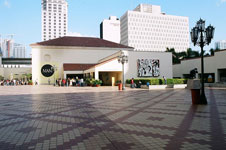 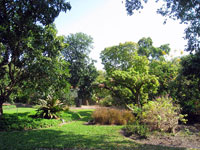 The city is home to numerous museums as well, many of which are in Downtown. These include the Bass Museum, Frost Art Museum, Historical Museum of Southern Florida, Jewish Museum of Florida, Lowe Art Museum, Miami Art Museum, Miami Children’s Museum, Miami Science Museum, Museum of Contemporary Art, Vizcaya Museum and Gardens, Wolfsonian-FIU Museum and the Miami Cultural Center, home of the Main Miami Library. Other popular cultural destinations in the area include Jungle Island, Miami Metro Zoo, Miami Seaquarium, and parks and gardens in and around the city; there are over 80 parks in Miami. The largest and most popular parks are Bayfront Park and Bicentennial Park (located in the heart of Downtown and the location of the American Airlines Arena and Bayside Marketplace), Fairchild Tropical Botanic Garden, Tropical Park, Watson Island, Morningside Park and Key Biscayne.

Miami is also a major fashion center, home to models and some of the top modeling agencies in the world. Miami is also host to many fashion shows and events, including the annual Miami Fashion Week and the Mercedes-Benz Fashion Week Miami held in the Wynwood Art District. 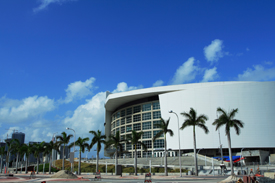 In the early 1970s, the Miami disco sound came to life with TK Records, featuring the music of KC and the Sunshine Band, with such hits as “Get Down Tonight”, “(Shake, Shake, Shake) Shake Your Booty” and “That’s the Way (I Like It)”; and the Latin-American disco group, Foxy (band), with their hit singles “Get Off” and “Hot Number”. Miami-area natives George McCrae and Teri DeSario were also popular music artists during the 1970s disco era. Miami-influenced, Gloria Estefan and the Miami Sound Machine hit the popular music scene with their Cuban-oriented sound and had huge hits in the 1980s with “Conga” and “Bad Boys”.

Miami is also considered a “hot spot” for dance music; Freestyle, a style of dance music popular in the 80’s and 90’s heavily influenced by Electro, hip-hop, and disco. Many popular Freestyle acts such as Pretty Tony, Debbie Deb, Stevie B, and Expos, originated in Miami. Indie/folk acts Cat Power and Iron & Wine are based in the city, while alternative hip-hop artist Sage Francis, electro artist Uffie, and the electroclash duo Avenue D were born in Miami, but musically based elsewhere. In addition, punk band Against All Authority is from Miami, and rock/metal bands Nonpoint and Marilyn Manson each formed in neighboring Fort Lauderdale. Popular Cuban American female recording artist, Ana Cristina, was born in Miami in 1985, and became the first Hispanic person in history to perform the “Star Spangled Banner” at a presidential inauguration. 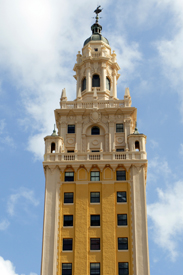 Miami is also home to a vibrant techno and dance scene and hosts the Winter Music Conference, the largest dance event in the world, Ultra Music Festival and many electronic music-themed celebrations and festivals. Along with neighboring Miami Beach, Miami is home to some famous nightclubs, such as Space, Mansion, Parkwest, Ink, Cameo, and Opium Garden. The city is known to be part of clubland, along with places such as Mykonos, Ibiza and Ayia Napa.

The Miami Heat is the only major professional sports team that plays its games within Miami’s city limits at the American Airlines Arena. The team recently won the 2006 NBA Finals, winning the series 4-2 over the Dallas Mavericks. The Miami Dolphins and the Florida Marlins both play their games in Miami Gardens. The Orange Bowl, a member of the Bowl Championship Series, hosts their college football championship games at Dolphin Stadium. The stadium has also hosted the Super Bowl; the Miami metro area has hosted the game a total of nine times (four Super Bowls in Dolphin Stadium, including Super Bowl XLI and five at the Miami Orange Bowl), tying New Orleans for the most games. 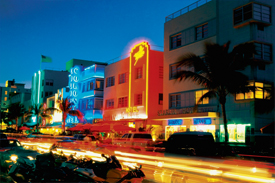 Miami is also the home of many college sports teams. Two largest are the Florida International University Golden Panthers whose football team plays at FIU Stadium and the University of Miami Hurricanes, whose football team formerly played at the Miami Orange Bowl, but moved to Dolphin Stadium starting with the 2008 season.

If you answered yes to any of the above questions, you will need an event permit in the City of Miami and EventPermits will facilitate all of your needs on your behalf.