Detroit is host to many outdoor events on an annual basis. As you start the planning process, it is important to recognize that your event plays a unique part in the relationship with the community. A quality event can make a difference to the City of Detroit. EventPermits works with the City of Detroit and its partners, in planning safe and successful events that comply with city law.

Many of the area’s prominent museums are located in the historic cultural center neighborhood around Wayne State University. These museums include the Detroit Institute of Arts, the Detroit Historical Museum, Charles H. Wright Museum of African American History, the Detroit Science Center, and the main branch of the Detroit Public Library. Other cultural highlights include Motown Historical Museum, Tuskegee Airmen Museum, Fort Wayne, Dossin Great Lakes Museum, the Museum of Contemporary Art Detroit (MOCAD), the Contemporary Art Institute of Detroit (CAID), and the Belle Isle Conservatory. Important history of Detroit and the surrounding area is exhibited at the The Henry Ford, the nation’s largest indoor-outdoor museum complex. The Detroit Historical Society provides information about tours of area churches, skyscrapers, and mansions. The Eastern Market farmer’s distribution center is the largest open-air flowerbed market in the United States and has more than 150 foods and specialty businesses. Other sites of interest are the Detroit Zoo and the Anna Scripps Whitcomb Conservatory on Belle Isle. 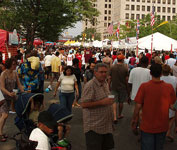 CityFest in the New Center 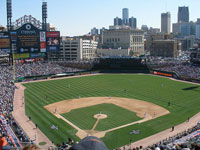 River Days, a five day festival on the International Riverfront, marked the opening of the River Walk along the east river leading up to the Windsor-Detroit International Freedom Festival fireworks with about 3.5 million visitors.

Detroit is one of 13 American metropolitan areas that are home to professional teams representing the four major sports in North America. All these teams but one play within the city of Detroit itself (the NBA’s Detroit Pistons and the WNBA’s Detroit Shock both play in suburban Auburn Hills at The Palace of Auburn Hills). There are three active major sports venues within the city: Comerica Park (home of the Major League Baseball team Detroit Tigers), Ford Field (home of the NFL’s Detroit Lions), and Joe Louis Arena (home of the NHL’s Detroit Red Wings). A 1996 marketing campaign promoted the nickname “Hockey town”.

Since 1916, the city has been home to an American Boat Racing Association Unlimited hydroplane boat race, held annually (with exceptions) on the Detroit River near Belle Isle. Often, the race is for the ABRA Challenge Cup, more commonly known as the Gold Cup (first awarded in 1904, created by Tiffany) which is the oldest active motorsport trophy in the world.

Detroit was the former home of a round of the Formula One World Championship (F1), which held the race on the streets of downtown Detroit from 1982 until 1988, after which the sanction moved from Formula One to Indy Cars until its final run in 2001. In 2007, open-wheel racing returned to Belle Isle with both Indy Racing League (IRL) and American Le Mans Series Racing (ALMS). 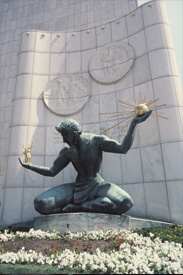 Detroit was given the name “City of Champions” in the 1930s for a series of successes both in individual and in team sport. Gar Wood (a native Detroiter) won the Harmsworth Trophy for unlimited powerboat racing on the Detroit River in 1931. In the next year, 1932, Eddie “The Midnight Express” Tolan, a student from Detroit’s Cass Technical High School, won the 100- and 200-meter races and two gold medals at the 1932 Summer Olympics. Joe Louis won the heavyweight championship of the world in 1937. In 1935, the Detroit Lions won the NFL championship. The Detroit Tigers have won ten American League pennants (The most recent being in 2006) and four World Series titles. The Detroit Red Wings have won 11 Stanley Cups (the most by an American NHL Franchise), the Detroit Pistons have won three NBA titles, and the Detroit Shock has won three WNBA titles. In 2007, Detroit was given the nickname “Sports City USA” in recognition of its numerous sports teams with good game statistics and the high amount of dedicated sports fans.

Detroit hosts many WWE events such as the 2007 WWE’s WrestleMania 23 that attracted 80,103 fans to Ford Field, the event marking the twentieth anniversary of WrestleMania III that drew a reported 93,173 to the Pontiac Silverdome in nearby Pontiac, Michigan in 1987. On May 31 and June 1 of 2008, The Red Bull Air Race took place along the Detroit River.

If you answered yes to any of the above questions, you will need an event permit in the City of Detroit and EventPermits will facilitate all of your needs on your behalf.