Dallas is host to many outdoor events on an annual basis. As you start the planning process, it is important to recognize that your event plays a unique part in the relationship with the community. A quality event can make a difference to the City of Dallas. EventPermits works with the City of Dallas and its partners, in planning safe and successful events that comply with city law.

Dallas is the center of the North Texas region’s art scene. Some areas known especially for the local art and culture include:

The Arts District of downtown is home to several arts venues, both existing and proposed. Notable venues in the district include the Dallas Museum of Art, the Morton H. Meyerson Symphony Center, The Trammell & Margaret Crow Collection of Asian Art and the Nasher Sculpture Center. Venues currently under construction or planned include the Winspear Opera House and the Dallas Center for the Performing Arts. The district is also home to DISD’s Booker T. Washington High School for the Performing and Visual Arts, which is currently being expanded. 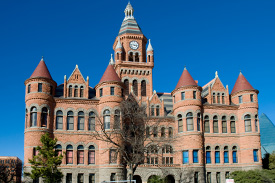 Deep Ellum originally became popular during the 1920s and 1930s as the prime jazz and blues hotspot in the south. Artists such as Blind Lemon Jefferson, Robert Johnson, Huddie “Leadbelly” Ledbetter, and Bessie Smith played in original Deep Ellum clubs like The Harlem and The Palace. Today, Deep Ellum is home to hundreds of artists who live in lofts and operate in studios throughout the district alongside bars, pubs, and concert venues. One major art infusion in the area is the city’s lax stance on graffiti, and thus several public ways including tunnels, sides of buildings, sidewalks, and streets are covered in murals.

The Cedars is home to a growing population of studio artists and an expanding host of entertainment venues as well. The area’s art scene began to grow in the early 2000s with the opening of Southside on Lamar, a Sears warehouse converted into lofts, studios, and retail. Current attractions include Gilley’s Dallas and Poor David’s Pub. Entrepreneur Mark Cuban recently purchased land in the area near Cedars Station, and locals speculate that he is planning an entertainment complex.

The Bishop Arts District in Oak Cliff is home to a growing number of studio artists living in converted warehouses. Walls of buildings along alleyways and streets are painted with murals and the surrounding district is home to many eclectic restaurants and shops. 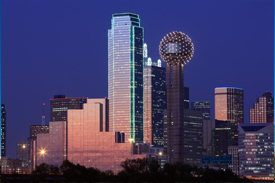 The most notable event held in Dallas is the State Fair of Texas, held annually at Fair Park since 1886. The fair is a massive event for the state of Texas and brings an estimated US$350 million to the city’s economy annually. The Red River Shootout (UT-OU) game at the Cotton Bowl and other Cotton Bowl games also bring significant crowds to the city.

The Major League Soccer team FC Dallas, formerly the Dallas Burn, used to play in the Cotton Bowl but moved to Pizza Hut Park in Frisco upon the stadium’s opening in 2005. However, the college Cotton Bowl football game is still played at the stadium. The Dallas Sidekicks, a former team of the Major Indoor Soccer League, used to play in Reunion Arena, as did the Mavericks and Stars before their move to the American Airlines Center.

The Texas Tornado, three-time defending champions of the North American Hockey League, plays at the Deja Blue Arena in Frisco.

Nearby Irving, Texas is home to the Dallas Cowboys of the National Football League. Since joining the league as an expansion team in 1960, the Cowboys have enjoyed substantial success, advancing to eight Super Bowls and winning five. Known widely as “America’s Team,” the Dallas Cowboys are financially the most valuable sports ‘franchise’ in the world, worth approximately 1.5 billion dollars. They are also the second most valuable sports organization in the world. The Cowboys are only out-valued by Manchester United, a soccer club from England, who are valued at 1.8 billion dollars. The Cowboys currently play at Texas Stadium and are relocating in 2009 to their new 100,000-seat stadium under construction in suburban Arlington.

Also in Arlington is Rangers Ballpark, home of the Texas Rangers of Major League Baseball.

NASCAR and other auto racing leagues have a presence in the area as well. Races are held every year at Texas Motor Speedway north of Fort Worth, a major stop on the NASCAR circuit. About halfway between Dallas and Fort Worth, horseracing takes place at Lone Star Park in Grand Prairie.

Other teams in the Dallas area include the Dallas Harlequins of the USA Rugby Super League, as well as the Frisco RoughRiders, the Fort Worth Cats, and the Grand Prairie AirHogs all minor league baseball teams. The Dallas Diamonds, the two-time national champions of the Women’s Professional Football League, plays in North Richland Hills. McKinney is home to the Dallas Revolution, an Independent Women’s Football League team.

Cricket is another sport that is popular among diaspora from South Asian countries. Local universities such as SMU and University of Texas at Dallas have their own cricket clubs that are affiliated with USA Cricket.

If you answered yes to any of the above questions, you will need an event permit in the City of Dallas and EventPermits will facilitate all of your needs on your behalf.