Cleveland is host to many outdoor events on an annual basis. As you start the planning process, it is important to recognize that your event plays a unique part in the relationship with the community. A quality event can make a difference to the City of Cleveland. EventPermits works with the City of Cleveland and its partners, in planning safe and successful events that comply with city law. 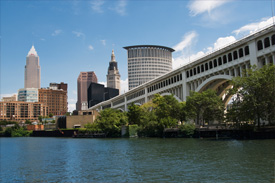 Cleveland is home to many festivals throughout the year. Cultural festivals such as the annual Feast of the Assumption in the Little Italy neighborhood, the Hellenic Heritage Festival at the Annunciation Greek Orthodox Church in the Tremont neighborhood, and the Harvest Festival in the Slavic Village neighborhood are popular events. Vendors at the West Side Market in Ohio City offer many different ethnic foods for sale. Cleveland hosts an annual parade on Saint Patrick’s Day that brings hundreds of thousands to the streets of downtown.

Oldenburg and van Bruggen’s Free Stamp, located in Willard Park to the east of City

HallFashion Week Cleveland, the city’s annual fashion event, is one of the few internationally recognized fashion industry happenings in North America. The show is considered by many to be the best in the Midwest perhaps second only to New York for fashion weeks in the US.

In addition to the cultural festivals, Cleveland hosted the CMJ Rock Hall Music Fest, which featured national and local acts, including both established artists and up-and-coming acts, but the festival was discontinued in 2007 due to financial and manpower costs to the Rock Hall. The annual Ingenuity Festival and Notacon conference focus on the combination of art and technology. The Cleveland International Film Festival has been held annually since 1977, and its eleven-day run drew a record 52,753 people in 2007. Cleveland also hosts an annual holiday display lighting and celebration, dubbed Winterfest, which is held downtown at the city’s historic hub, Public Square. 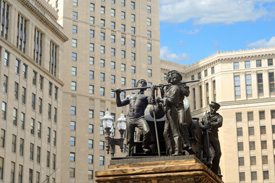 Downtown Cleveland is centered around Public Square and includes a wide range of diversified districts. Downtown Cleveland is home to the traditional Financial District and Civic Center, as well as the distinct Theatre District, which houses Playhouse Square Center, and mixed-use neighborhoods such as the Flats and the Warehouse District, which are occupied by industrial and office buildings and also by restaurants and bars. The number of downtown housing units in the form of condominiums, lofts, and apartments has increased over the past ten years. This trend looks to continue with the recent revival of the Flats, the Euclid Corridor Project, and the success of East 4th Street.

If you answered yes to any of the above questions, you will need an event permit in the City of Cleveland and EventPermits will facilitate all of your needs on your behalf.