The American Tradition of Tailgating with Larry the Cable Guy 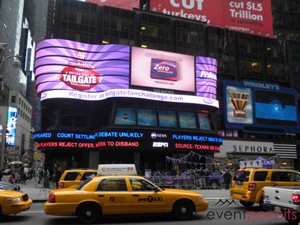 With the National Football League season in full swing, thousands of fans pack parking lots across the country every Sunday for the great American tradition of tailgating. With coolers full of beer, burgers and wings in tow, these tailgaters are often victims to the dark side of tailgating: inevitable heartburn. This is why Prilosec teamed up with EventPermits and Gigunda Group to kickoff their Better Way To Tailgate Challenge, a campaign to let die-hard fans know that heartburn does not always have to be the result of hours spent in parking lots before the game.

Highlighted by an appearance from the self-proclaimed “Tailgating King of Comedy,” comedian Larry the Cable Guy, passersby were treated to a tailgate atmosphere and traditional tailgate games in the center of New York’s Times Square.
The tailgate, which was located directly outside of Good Morning America studios, included Larry the Cable Guy himself and Prilosec looking down on Times Square from ABC’s SuperSign. The screen, which was provided by Times Square Domination, allowed all those in Times Square to take part in the Better Way To Tailgate Challenge and helped spread the word that avid football fans no longer have to be sidelined by the uncomfortable heartburn that comes along with fall Sunday’s in the U.S.

Fans can register at TailgateFan until January 4, 2012 for a chance to tailgate their way to Indianapolis to compete for the title of the “A Better Way to Tailgate” winner. Three grand prize winners will each win the ultimate Prilosec OTC tailgating prize pack, including the chance to showcase their tailgate style in Indianapolis and two (2) tickets to Super Bowl XLVI!

Enter to win in one of three categories: 1). Food Served 2). Tailgate Set-Up and 3). Team Spirit. All entries must include a tailgate photo. Note the “Food Served” category also requires a recipe submission. In addition to game day tickets, other prizes include VIP tickets to Larry’s comedy show and the ultimate tailgate gear.