South Beach is host to many outdoor events on an annual basis. As you start the planning process, it is important to recognize that your event plays a unique part in the relationship with the community. A quality event can make a difference to the Neighborhood of South Beach. EventPermits works with the Neighborhood of South Beach and its partners, in planning safe and successful events that comply with city law.

In both daytime and at nightfall, the South Beach section of Miami Beach is a major entertainment destination with hundreds of nightclubs, restaurants, boutiques and hotels. The area is popular with both American and international tourists (mainly from Europe, Latin America, Canada, Israel, the Caribbean and within the United States), with some having permanent or second homes. The large number of European and Brazilian tourists also explains their influence on South Beach’s lax and overall tolerance of topless sunbathing, despite it being a public beach.

The reflection of South Beach’s residents is evident in the various European languages, as well as Semitic languages and many other languages spoken. As of 2000, many Miami Beach residents, including those of South Beach, spoke Spanish as a first language, which accounted for 55% of residents, while English was the first language for 33% of the population. Reflecting the European and Brazilian community, Portuguese (mainly Brazilian Portuguese) was spoken by 3% of residents, while French (including Canadian French) was at 2%, German at 1.12%, Italian 0.99%, and Russian was 0.85% of the population. Due to the large Jewish and Israeli community, Yiddish made up 0.81% of speakers, and Hebrew was the mother tongue of 0.74% of the population.

Another unique aesthetic attribute of South Beach is the several colorful and unique lifeguard stands, still used today by South Beach’s lifeguards. After Hurricane Andrew, Architect William Lane donated his design services to the city and added new stops on design tours in the form of lifeguard towers. His towers instantly became symbols of the revived City of Miami Beach. 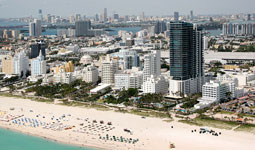 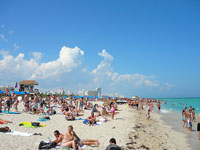 Lincoln Road is an open-air pedestrian mall, considered South Beach’s premiere shopping area. It is home to many restaurants and several nightclubs, such as Score and Funktion, as well as many retail outlets. While Lincoln Road was one time rather downtrodden, it began a renaissance in the 1980s as an arts and cultural center. With its unique boutique shops and restaurants, it has had “an esoteric chic that maintains its trendy appeal.” (Ref. Ocean Drive Magazine) It is located in between 16th Street and 17th Street and spans the beach in an east-west direction. Lincoln Road commerce is greatly facilitated by the 17th street parking garage. The Miami Beach Preservation Board recently approved the closure of automobile traffic on the westward part of Lincoln Road, in favor of the renovation of the SunTrust building.

Ocean Drive is the easternmost street in South Beach, and stems from south of First to 15th Street, running in a north-south direction. Ocean Drive is responsible for the South Beach aesthetic that most out-of-town visitors expect. It is a popular Spring Break and tourist area, including the famous, yet predominantly local, Pearl and Nikki Beach nightspots. It is also home to several prominent restaurants (including “News Cafe,” “Mango’s,” and the MTV-popularized “Clevelander”) and is the site of Gianni Versace’s former ocean front mansion.

The Carlyle Hotel on Ocean Drive near 13th Street is an iconic Art Deco landmark. Built in 1939, it is one of the most sought after settings for photo shoots, televised programming, Hollywood and independent filmmaking. It was the outside setting for the 1996 MGM film The Birdcage.

Collins Avenue runs parallel to Ocean, one block west. It is also State Road A1A. Collins is home to many historic Art Deco hotels, and several nightclubs to the north, including Mynt and Rokbar.

Espanola Way, which runs from Collins Avenue to Pennsylvania Avenue, was conceived by N.B.T. Roney (of the Roney Plaza Hotel) in 1925 as “The Historic Spanish Village,” modeled after the romantic Mediterranean villages found in France and Spain. Today it consists of art galleries, restaurants, and quirky shops.

Alton Road is the main Westside north-south street located 1-3 blocks from Biscayne Bay. On the part that traverses South Beach, the road is host to many local businesses, including dry cleaners, small furniture stores, small grocery markets, non-chain restaurants and fast food restaurants. It is mainly residential once it crosses Michigan Avenue north of South Beach. 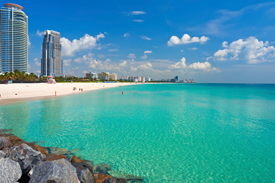 Washington Avenue is one of the best-known streets in South Beach. Running parallel with Ocean and Collins, Washington is notorious for having some of the world’s largest and most popular nightclubs, such as Crobar and Mansion. During “season” (October 15th to May 15th) the street is jammed with traffic until early in the morning (as late as 6 am) every night of the week. In the 1990s explosion of South Beach as a nightclub venue, its nightclub moguls included Ingrid Casares, whose investors included the singer Madonna.

South Beach has an active club and bar scene. It is host to more than 150 clubs and other venues, most of which close at 5 am. South Beach can be expensive, and access to nightclubs is often difficult for non-locals who do not have connections, or do not plan their evenings. Access to more popular nightspots can cost $20-60 depending on event and venue and sometimes comes with a wait of several hours, in addition to evaluation by door staff.

Nightlife in South Beach is dynamic and ever changing, although The Clevelander and Mac’s Club Deuce have remained steadfast tourist destinations on Ocean Drive for well over a decade. The average club is only open for about a season or less.

The television program, “UberGuide”, recently profiled South Beach, naming B.E.D. nightclub as one of the top ten legendary bars in the world.
South Beach is one of the world’s foremost locations for fashion shoots, making the Miami area the model shoot capital of the United States. Approximately 1500 models live in the area, with many more arriving during the prime fashion-shooting season, October to March. Ocean Drive is the most popular place for shoots, but back streets are often used as well.

If you answered yes to any of the above questions, you will need an event permit in the Neighborhood of South Beach and EventPermits will facilitate all of your needs on your behalf.