Seattle is host to many outdoor events on an annual basis. As you start the planning process, it is important to recognize that your event plays a unique part in the relationship with the community. A quality event can make a difference to the City of Seattle. EventPermits works with the City of Seattle and its partners, in planning safe and successful events that comply with city law.

Among Seattle’s prominent annual fairs and festivals are the 24-day Seattle International Film Festival, Northwest Folklife over the Memorial Day weekend, numerous Seafair events throughout July and August (ranging from a Bon Odori celebration to hydroplane races), the Bite of Seattle, one of the largest Gay Pride festivals in the United States, and, perhaps most notable of all, the art and music festival Bumbershoot, which programs music as well as other art and entertainment over the Labor Day weekend. All are typically attended by 100,000 people annually, as are Hempfest and two separate Independence Day celebrations. In the past, the Gay Pride parade and festival have been centered on Capitol Hill, but since 2006, festivities have been held citywide, and the parade has followed a route in Downtown from the retail core to Seattle Center. 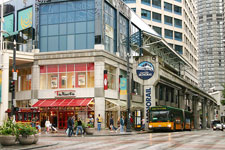 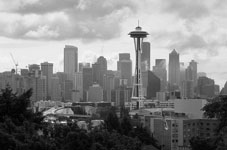 There are other annual events, ranging from the Seattle Antiquarian Book Fair & Book Arts Show; an anime convention, Sakura-Con; Penny Arcade Expo, a gaming convention; specialized film festivals, such as the Seattle Gay and Lesbian Film Festival; and a two-day, 9,000-rider Seattle to Portland bicycle ride.

The Henry Art Gallery opened in 1927, the first public art museum in Washington. The Seattle Art Museum (SAM) opened in 1933; SAM opened a museum downtown in 1991 (expanded and reopened 2007); since 1991, the 1933 building has been SAM’s Seattle Asian Art Museum (SAAM). SAM also operates the Olympic Sculpture Park (opened 2007) on the waterfront north of the downtown piers. The Frye Art Museum is a free museum on First Hill.

Regional history collections are at the Loghouse Museum in Alki, Klondike Gold Rush National Historical Park, the Museum of History and Industry and the Burke Museum of Natural History and Culture. Industry collections are at the Center for Wooden Boats and the adjacent Northwest Seaport, the Seattle Metropolitan Police Museum, and the Museum of Flight. Regional ethnic collections include the Nordic Heritage Museum, the Wing Luke Asian Museum and the Northwest African American Museum. Seattle has artist-run galleries, including 10-year veteran Soil Art Gallery, and the newer Crawl Space Gallery.

Woodland Park Zoo opened as a private menagerie in 1889, but was sold to the city in 1899. The Seattle Aquarium has been open on the downtown waterfront since 1977. The Seattle Underground Tour, an exhibit of places that existed before the Great Fire, is also popular. There are also many community centers for recreation, including Rainier Beach, Van Asselt, Rainier, and Jefferson south of the Ship Canal and Green Lake, Laurelhurst, Loyal Heights north of the Canal, and Meadowbrook.

Seattle’s professional sports history began at the start of the 20th century with the PCHA’s Seattle Metropolitans, which in 1917 became the first American hockey team to win the Stanley Cup. Today Seattle has four major professional sports teams: The National Football League’s Seattle Seahawks, Major League Baseball’s Seattle Mariners, the Seattle Sounders FC, which currently play in Major League Soccer and the 2004 Women’s National Basketball Association champions, Seattle Storm. From 1967 to 2008, Seattle was home to an NBA franchise, the Seattle Supersonics, who were the 1978-79 NBA champions; the team was relocated to Oklahoma City after the 2007-08 season. The Seattle Sounders FC, began play in Major League Soccer in 2009.

Seattle also boasts a strong history in collegiate sports, the University of Washington and Seattle University are NCAA Division I schools. The Major League Baseball All-Star game was held in Seattle twice, first at the Kingdome in 1979 and again at Safeco Field in 2001. That same year, the Seattle Mariners tied the all-time single regular season wins record with 116 wins. The NBA All-Star game was also held in Seattle twice, the first in 1974 at the Seattle Center Coliseum and the second in 1987 at the Kingdome.

In 2006, the new Qwest Field (Seattle Seahawks Stadium) hosted the 2005-06 NFC Championship. In 2008, Qwest Field hosted the first game of the 2007-08 NFL playoffs, in which the Seahawks defeated the Washington Redskins, 35-14. Qwest also serves as the home field for the Seattle Sounders FC of Major League Soccer.

If you answered yes to any of the above questions, you will need an event permit in the City of Seattle and EventPermits will facilitate all of your needs on your behalf.