San Diego is host to many outdoor events on an annual basis. As you start the planning process, it is important to recognize that your event plays a unique part in the relationship with the community. A quality event can make a difference to the City of San Diego. EventPermits works with the City of San Diego and its partners, in planning safe and successful events that comply with city law. 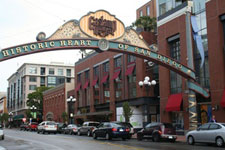 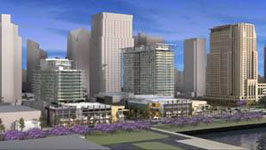 Downtown San Diego has experienced some urban renewal since the early 1980s. This has resulted in the opening of Horton Plaza, the revival of the Gaslamp Quarter, and the construction of the San Diego Convention Center.

The 2005 boom in the construction of condominiums and skyscrapers brought gentrification as well.

The North Embarcadero is slated to have parks in addition to a waterfront promenade. Balboa Park is scheduled to be linked to downtown.

San Diego has a growing art scene. “Kettner Nights” at the Art and Design District in Little Italy has art and design exhibitions throughout many retail design stores and galleries on selected Friday nights. “Ray at Night” at North Park host a variety of small-scale art galleries on the second Saturday evening of each month. La Jolla and nearby Solana Beach have a variety of art galleries. 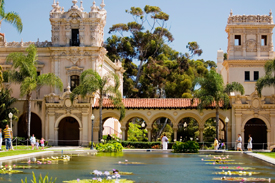 The San Diego Symphony at Symphony Towers performs on a regular basis and is directed by Jahja Ling. The San Diego Opera at Civic Center Plaza was ranked by Opera America as one of the top 10 opera companies in the United States. Old Globe Theatre at Balboa Park produces about 15 plays and musicals annually. The La Jolla Playhouse at UCSD is directed by Christopher Ashley. The Joan B. Kroc Theatre at Kroc Center’s Performing Arts Center is a 600-seat state-of-the-art theatre that hosts music, dance and theatre performances. The San Diego Repertory Theatre at the Lyceum Theatres in Horton Plaza produces a variety of plays and musicals. Serving the northeastern part of San Diego is the California Center for the Arts in Escondido, a 400-seat performing arts theater.

Tourism has affected the city’s culture, as San Diego houses many tourist attractions, such as SeaWorld San Diego, Belmont amusement park, San Diego Zoo, San Diego Wild Animal Park, and nearby Legoland. San Diego’s Spanish influence can be seen in the many historic sites across the city, such as the Spanish missions and Balboa Park. Cuisine in San Diego is diverse, and includes European-American, Mexican-American, and Asian-American cuisine. Annual events in San Diego include Comic-Con, San Diego/Del Mar Fair, and Street Scene Music Festival.

Major League Baseball’s San Diego Padres play in Petco Park. The semi-final and final games of the inaugural World Baseball Classic were played there in 2006, and are scheduled for the second WBC in 2009. Some soccer and rugby events occasionally take place in the park. 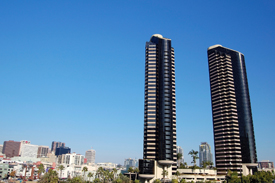 The USA Sevens takes place in the city. This is an event in the annual IRB Sevens World Series for international teams in rugby sevens, a variant of rugby union with seven players per side instead of 15. The USA Sevens moved from the Los Angeles area to San Diego in 2007.

San Diego has the largest championship drought in the nation with at least two major-league sports franchises; dating back to 1963 (45 Years as of 2008), as well as being the largest United States city to have not won a Super Bowl, World Series, Stanley Cup, NBA Finals or any other Major League sports championship; this is known as the San Diego Sports Curse.

San Diego is also a Mecca for Aggressive Rollerblading because of it weather, topography and history.

If you answered yes to any of the above questions, you will need an event permit in the City of San Diego and EventPermits will facilitate all of your needs on your behalf.