San Antonio is host to many outdoor events on an annual basis. As you start the planning process, it is important to recognize that your event plays a unique part in the relationship with the community. A quality event can make a difference to the City of San Antonio. EventPermits works with the City of San Antonio and its partners, in planning safe and successful events that comply with city law.

Twenty million tourists visit the city and its attractions every year, contributing substantially to the city’s economy. The Henry B. Gonzalez Convention Center alone hosts more than 300 events each year with over 750,000 convention delegates from around the world. Tourism employs 94,000 citizens and makes an economic impact of over $8.7 billion in the local economy as revealed in the Economic Impact Study conducted every two years by the San Antonio Tourism Council and the research team of Dr. Richard Butler and Dr. Mary Stefl of Trinity University. Tourism also brings new annual revenues to the City of San Antonio and other governmental entities with the hotel & motel tax, sales taxes and other revenues from hospitality agreements and contracts. This number exceeded over $160 million in the 2004 study. 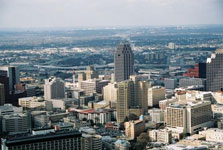 Tower of the Americas 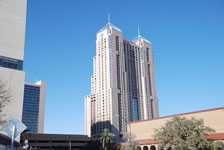 San Antonio is a popular tourist destination. The jewel of the city is the River Walk, which meanders through the downtown area. Lined with numerous shops, bars, and restaurants, as well as the Arneson River Theater, this attraction is transformed into an impressive festival of lights during the Christmas and New Year holiday period, and is suffused with the local sounds of folklorico and flamenco music during the summer, particularly during celebrations such as the Fiesta Noche del Rio. Also based along the River Walk is the newly restored Aztec On The River, the only surviving exotic-themed movie palace in Texas.

The Alamo, located nearby, is Texas’ top tourist attraction, while the River Walk is the second most visited attraction. SeaWorld, located 16 miles west of the city, is the number 3 attraction. 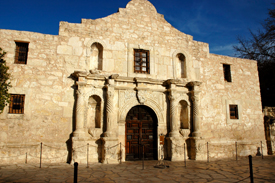 The downtown area also features Cathedral of San Fernando, The Majestic Theatre, HemisFair Park (home of the Tower of the Americas and the Institute of Texan Cultures), La Villita, El Mercado, the Spanish Governor’s Palace, and the historic Menger Hotel. On the northern side of the Alamo complex, beside the Emily Morgan Hotel, is the San Antonio Cavalry Museum, which features cavalry artifacts and exhibits and is frequented by local re-enactors.

The Fairmont Hotel, built in 1906, is in the Guinness World Records as one of the heaviest buildings ever moved intact. It was placed in its new location, three blocks south of the Alamo, over four days in 1985, and cost $650,000 to move.

Beyond taking in the sights and sounds of San Antonio, tourists can sample some of its world famous Tex-Mex cuisine at the many fine restaurants located throughout the city. Mexican restaurants are abundant in virtually all parts of town, and most – except for those in the Far North and some of the Uptown enclaves like Alamo Heights – are relatively inexpensive. Some outstanding examples of Tex-Mex eateries include Jacala, on West Avenue on the near Northwest side, La Hacienda de Los Barrios, on the North East side, Tommy’s on Nogalitos at I-35 near downtown, and Los Barrios, on the near North side of town.

The city’s only top-level professional sports team, and consequently the team most San Antonians follow, is the San Antonio Spurs of the National Basketball Association. The Spurs have been playing in San Antonio since 1973 and have won four NBA Championships (1999, 2003, 2005, and 2007). Previously, the Spurs played at the Alamodome, which was originally built for football, and before that the HemisFair Arena, but the Spurs built – with public money – and moved into the SBC Center in 2002, since renamed the AT&T Center, following the merger of SBC and AT&T. 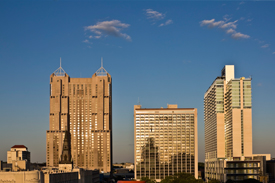 The University of Texas at San Antonio fields San Antonio’s only NCAA Division I athletic teams known as the UTSA Roadrunners. The university recently voted on the addition of a football team, which has yet to materialize.

The city has also hosted the Dallas Cowboys and Houston Oilers preseason camps in the past, and they have signed a contract with the Cowboys in which the Cowboys will practice in San Antonio through 2011.

If you answered yes to any of the above questions, you will need an event permit in the City of San Antonio and EventPermits will facilitate all of your needs on your behalf.