New York is host to many outdoor events on an annual basis. As you start the planning process, it is important to recognize that your event plays a unique part in the relationship with the community. A quality event can make a difference to the City of New York. EventPermits works with the City of New York and its partners, in planning safe and successful events that comply with city law.

View of the Midtown Manhattan skyline from the Empire State Building

“Culture just seems to be in the air, like part of the weather”, the writer Tom Wolfe has said of New York City. Numerous major American cultural movements began in the city, such as the Harlem Renaissance, which established the African-American literary canon in the United States. The city was a center of jazz in the 1940s, abstract expressionism in the 1950s and the birthplace of hip-hop in the 1970s. The city’s punk and hardcore scenes were influential in the 1970s and 1980s, and the city has long had a flourishing scene for Jewish American literature. Prominent indie rock bands coming out of New York in recent years include The Strokes, Interpol, The Bravery, Scissor Sisters, and They Might Be Giants.

Tourism is important to New York City, with about 47 million foreign and American tourists visiting each year. Major destinations include the Empire State Building, Ellis Island, Broadway theatre productions, museums such as the Metropolitan Museum of Art, and other tourist attractions including Central Park, Washington Square Park, Rockefeller Center, Times Square, the Bronx Zoo, New York Botanical Garden, luxury shopping along Fifth and Madison Avenues, and events such as the Halloween Parade in Greenwich Village, the Tribeca Film Festival, and free performances in Central Park at Summerstage. The Statue of Liberty is a major tourist attraction and one of the most recognizable icons of the United States. Many of the city’s ethnic enclaves, such as Jackson Heights, Flushing, and Brighton Beach are major shopping destinations for first and second generation Americans up and down the East Coast. 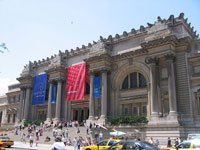 The Metropolitan Museum of Art

New York is a global center for the television, advertising, music, newspaper and book publishing industries and is the largest media market in North America.

Some of the city’s media conglomerates include Time Warner, the News Corporation, the Hearst Corporation, and Viacom. Seven of the world’s top eight global advertising agency networks have their headquarters in New York. Three of the “Big Four” record labels are based in the city, as well as in Los Angeles.

One-third of all American independent films are produced in New York. More than 200 newspapers and 350 consumer magazines have an office in the city and the book-publishing industry employs about 25,000 people. 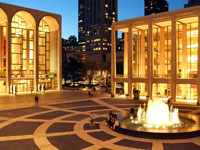 The city also has a major ethnic press, with 270 newspapers and magazines published in more than 40 languages. El Diario La Prensa is New York’s largest Spanish-language daily and the oldest in the nation. The New York Amsterdam News, published in Harlem, is a prominent African American newspaper.

The Village Voice is the largest alternative newspaper.

Many cable channels are based in the city as well, including MTV, Fox News, HBO and Comedy Central. In 2005, there were more than 100 television shows taped in New York City.

New York is also a major center for non-commercial media. The oldest public-access television channel in the United States is the Manhattan Neighborhood Network, founded in 1971. WNET is the city’s major public television station and a primary provider of national PBS programming. WNYC, a public radio station owned by the city until 1997, has the largest public radio audience in the United States.

New York is one of the few areas of the United States where baseball, rather than American football, remains the most popular sport. There have been fourteen World Series championship series between New York City teams, in matchups called Subway Series. New York is one of only five metro areas (Chicago, Washington-Baltimore, Los Angeles and the San Francisco Bay Area being the others) to have two baseball teams. The city’s two current Major League Baseball teams are the New York Yankees and the New York Mets, who compete in six games every regular season. The Yankees have enjoyed 26 world titles, while the Mets have taken the Series twice. The city also was once home to the New York Giants (now the San Francisco Giants) and the Brooklyn Dodgers (now the Los Angeles Dodgers). Both teams moved to California in 1958. There are also two minor league baseball teams in the city, the Staten Island Yankees and Brooklyn Cyclones. 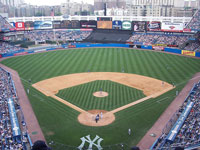 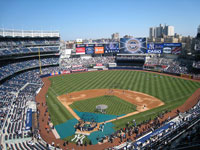 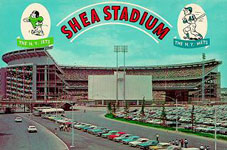 The city is represented in the National Football League by the New York Jets and New York Giants (officially the New York Football Giants), although both teams play their home games in Giants Stadium in nearby New Jersey. 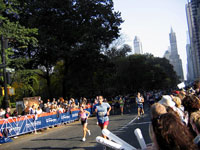 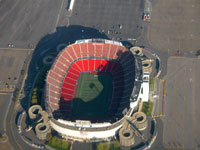 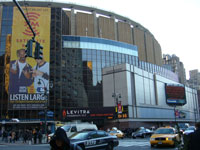 The New York Rangers represent the city in the National Hockey League. Within the metro area are two other teams, the New Jersey Devils in the Meadowlands and the New York Islanders, who play in Long Island. This is the only instance of any metro area having three teams within one of the four major North American professional sports leagues.

New York’s Major League Soccer team is the Red Bulls who play their home games at the Giants Stadium in New Jersey.

As a global city, New York supports many events outside these sports. Queens is host of the U.S. Tennis Open, one of the four Grand Slam tournaments. The New York City Marathon is the world’s largest, and the 2004-2006 races hold the top three places in the marathons with the largest number of finishers, including 37,866 finishers in 2006. The Millrose Games is an annual track and field meet whose featured event is the Wanamaker Mile. Boxing is also a very prominent part of the city’s sporting scene, with events like the Amateur Boxing Golden Gloves being held at Madison Square Garden each year.

Many sports are associated with New York’s immigrant communities. Stickball, a street version of baseball, was popularized by youths in working class Italian, German, and Irish neighborhoods in the 1930s. Stickball is still commonly played, as a street in The Bronx has been renamed Stickball Blvd. as tribute to New York’s most known street sport. In recent years several amateur cricket leagues have emerged with the arrival of immigrants from South Asia and the Caribbean. Street hockey, football, and baseball are also commonly seen being played on the streets of New York. New York City is often called “The World’s Biggest Urban Playground”, as street sports are commonly played by people of all ages.

If you answered yes to any of the above questions, you will need an event permit in the City of New York and EventPermits will facilitate all of your needs on your behalf.