Minneapolis is host to many outdoor events on an annual basis. As you start the planning process, it is important to recognize that your event plays a unique part in the relationship with the community. A quality event can make a difference to the City of Minneapolis. EventPermits works with the City of Minneapolis and its partners, in planning safe and successful events that comply with city law.

The Minneapolis park system has been called the best-designed, best-financed, and best-maintained in America. Foresight, donations and effort by community leaders enabled Horace Cleveland to create his finest landscape architecture, preserving geographical landmarks and linking them with boulevards and parkways. The city’s Chain of Lakes are connected by bike, running and walking paths and used for swimming, fishing, picnics, boating and ice-skating. A parkway for cars, a bikeway for riders and a walkway for pedestrians runs parallel along the 52 miles (84 km) route of the Grand Rounds Scenic Byway. Residents brave the cold weather in December to watch the nightly Holidazzle Parade. 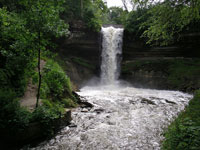 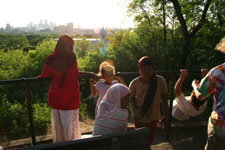 Minnehaha Falls is part of a 193 acres (78 ha) city park rather than an urban area, because its waterpower was overshadowed by that of St. Anthony Falls a few miles upriver.

Theodore Wirth is credited with the development of the parks system. Today, 16.6% of the city is parks and there are 770 square feet (72 m2) of parkland for each resident. In 2008 Minneapolis ranked number one as the most parkland per resident within cities of similar population densities.

Parks are interlinked in many places and the Mississippi National River and Recreation Area connects regional parks and visitor centers. The country’s oldest public wildflower garden, the Eloise Butler Wildflower Garden and Bird Sanctuary located within Theodore Wirth Park, which is shared with Golden Valley and is about 60% the size of Central Park in New York City. Site of the 53-foot (16 m) Minnehaha Falls, Minnehaha Park is one of the city’s oldest and most popular parks, receiving over 500,000 visitors each year. Henry Wadsworth Longfellow named Hiawatha’s wife Minnehaha for the Minneapolis waterfall in The Song of Hiawatha, a bestselling and often-parodied 19th century poem.

Runner’s World ranks the Twin Cities as America’s sixth best city for runners. The Twin Cities Marathon run in Minneapolis and St. Paul every October draws 250,000 spectators. The 26.2-mile (42.2 km) race is a Boston and USA Olympic Trials qualifier. The organizers sponsor three more races: a Kids Marathon, a 1-mile (1.6 km), and a 10 miles (16 km). Minneapolis is home to more golfers per capita than any major U.S. city. Five golf courses are located within the city, with nationally ranked Hazeltine National Golf Club, and Interlachen Country Club in nearby suburbs. The state of Minnesota has the nation’s highest number of bicyclists, sport fishermen, and snow skiers per capita. Hennepin County has the second-highest number of horses per capita in the U.S. While living in Minneapolis, Scott and Brennan Olson founded (and later sold) Rollerblade, the company that popularized the sport of inline skating. 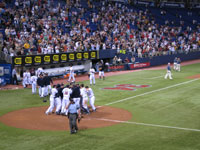 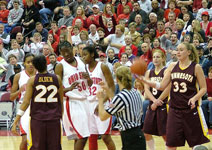 Professional sports are well established in Minneapolis. First playing in 1884, the Minneapolis Millers baseball team produced the best won-lost record in their league at the time and contributed fifteen players to the Baseball Hall of Fame. During the 1940s and 1950s the Minneapolis Lakers basketball team, the city’s first in the major leagues in any sport, won six basketball championships in three leagues before moving to Los Angeles. The American Wrestling Association, formerly the NWA Minneapolis Boxing & Wrestling Club, operated in Minneapolis from 1960 until the 1990s.

The Minnesota Vikings and the Minnesota Twins arrived in the state in 1961. The Vikings were an NFL expansion team and the Twins were formed when the Washington Senators relocated to Minnesota. Both teams played outdoors in the open air Metropolitan Stadium in the suburb of Bloomington for twenty years before moving to the Hubert H. Humphrey Metrodome, where the Twins won the World Series in 1987 and 1991. The Minnesota Timberwolves brought NBA basketball back to Minneapolis in 1989, followed by the Minnesota Lynx WNBA team in 1999. They play in the Target Center. The NHL ice hockey team Minnesota Wild and the National Lacrosse League team Minnesota Swarm play at the Xcel Energy Center. The USL-1 soccer team Minnesota Thunder plays in Blaine, a suburb of Minneapolis.

The downtown Metrodome, opened in 1982, is the largest sports stadium in Minnesota. The three major tenants are the Vikings, the Twins, and the university’s Golden Gophers baseball team. The Metrodome is the only stadium in the country to have hosted a Major League Baseball All-Star Game, the Super Bowl, the World Series, and NCAA Basketball Men’s Final Four. Runners, walkers, inline skaters, coed volleyball teams, and touch football teams all have access to “The Dome”. Events from sports to concerts, community activities, religious activities, and trade shows are held more than three hundred days per year, making the facility one of the most versatile stadiums in the world.

The state of Minnesota authorized replacement of the Metrodome with three separate stadiums that estimates in 2007 totaled at about $1.7 billion. Six spectator sport stadiums will be in a 1.2-mile (2 km) radius centered downtown, counting the existing facilities at Target Center and the university’s Williams Arena and Mariucci Arena. The new Target Field is funded by the Twins and Hennepin County. The Gopher football program’s new TCF Bank Stadium is being built by the university and the state’s general fund. The Vikings Stadium plan for Blaine, Minnesota changed and as of 2007 was estimated at $954 million for rebuilding on the Metrodome site.

If you answered yes to any of the above questions, you will need an event permit in the City of Minneapolis and EventPermits will facilitate all of your needs on your behalf.