Louisville is host to many outdoor events on an annual basis. As you start the planning process, it is important to recognize that your event plays a unique part in the relationship with the community.
A quality event can make a difference to the City of Louisville. EventPermits works with the City of Louisville and its partners, in planning safe and successful events that comply with city law.

Usually beginning in late February or early March is the Humana Festival of New American Plays at Actors Theatre of Louisville, an internationally acclaimed new-play festival that lasts approximately six weeks.
On Memorial Day weekend, Louisville hosts the largest annual Beatles Festival in the world, Abbey Road on the River. The festival lasts five days and is located on the Belvedere in downtown Louisville.

The summer season in Louisville also features a series of cultural events such as the Kentucky Shakespeare Festival (commonly called Shakespeare in the Park), held in July of every year and features free Shakespeare plays in Central Park in Old Louisville. June sees the relatively new addition of Louisville Pride festivities, including an annually growing and media-covered gay-pride parade through the streets of downtown Louisville and picnic at the Belvedere. The Kentucky State Fair is held every August at the Kentucky Exposition Center in Louisville as well, featuring an array of culture from all areas of Kentucky. 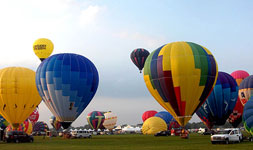 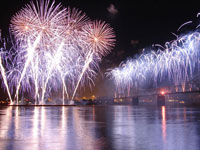 In September is the Bluegrass Balloon Festival, the fifth largest hot air balloon festival in the nation. The festival features early morning balloon races, as well as balloon glows in the evening. In September, in nearby Bardstown, is the annual Kentucky Bourbon Festival, which features some of the finest bourbon in the world. The suburb of Jeffersontown is also the home of the annual Gaslight Festival, a series of events spread over a week. Attendance is approximately 200,000 for the week.

The month of October features the St. James Court Art Show in Old Louisville. Thousands of artists gather on the streets and in the courtyard to exhibit and sell their wares, and the event is attended by many art collectors and enthusiasts. The show is the second most attended event next to the Derby. Another art-related event that occurs every month is the First Friday Trolley Hop. A TARC trolley takes art lovers to many downtown area art galleries on the first Friday of every month. 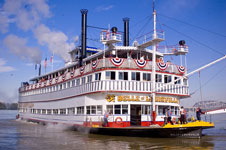 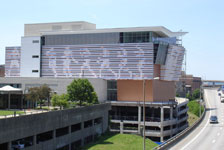 The West Main District in downtown Louisville features what is locally known as “Museum Row”. In this area, the Frazier International History Museum, which opened in 2004, features a collection of arms, armor and related historical artifacts spanning 1,000 years, concentrating on U.S. and UK arms. The building features three stories of exhibits, two reenactment arenas, a 120-seat auditorium, and a 48-seat movie theater. Also nearby is the Louisville Science Center, which is Kentucky’s largest hands-on science center and features interactive exhibits, IMAX films, educational programs and technology networks. The Muhammad Ali Center opened November 2005 in “Museum Row” and features Louisville native Muhammad Ali’s boxing memorabilia, as well as information on the core themes that he has taken to heart: peace, social responsibility, respect and personal growth.

The Speed Art Museum opened in 1927 and is the oldest and largest art museum in the state of Kentucky. Located adjacent to the University of Louisville, the museum features over 12,000 pieces of art in its permanent collection and hosts regular temporary exhibitions. Multiple art galleries are located in the city, but they are especially concentrated in the East Market District of downtown. These rows of galleries, plus others in the West Main District are prominently featured in the monthly First Friday Trolley Hop.

Several local history museums can be found in the Louisville area. The most prominent among them is The Filson Historical Society, founded in 1884, which has holdings exceeding 1.5 million manuscript items and over 50,000 volumes in the library. The Filson’s extensive collections focus on Kentucky, the Upper South, and the Ohio River Valley, and contain a large collection of portraiture and over ten thousand 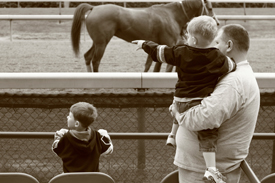 There are also several historical properties and items of interest in the area, including the Belle of Louisville, the oldest Mississippi-style steamboat in operation in the United States. The United States Marine Hospital of Louisville is considered the best remaining antebellum hospital in the United States. Robert Mills, who is best known as the designer of the Washington Monument, designed it. Fort Knox, spread out among Bullitt, Hardin and Meade Counties (two of which are in the Louisville metropolitan area), is home to the U.S. Bullion Depository and the General George Patton Museum. The previously mentioned Locust Grove, former home of Louisville Founder George Rogers Clark, portrays life in the early days of the city. Other notable properties include the Farmington Historic Plantation (home of the famous Speed family), Riverside, The Farnsley-Moremen Landing, and the restored Union Station, which was opened in September 7, 1891. The Louisville area is also home to the Waverly Hills Sanatorium, a turn-of-the-century (20th) hospital that was originally built to accommodate tuberculosis patients, and subsequently has been reported and sensationalized to be haunted.

College sports are very popular in the Louisville area, especially college basketball. The Louisville Cardinals rank first nationally in percent to capacity attendance annually, with Freedom Hall averaging better than 100% for 10 straight years. The Cardinals ranked 4th in actual attendance in 2007, although they will likely pass Syracuse and North Carolina in attendance when the new 22,000 seat waterfront arena is completed in 2010. The Cardinals also hold the Big East conference women’s basketball paid attendance record with nearly 17,000 attending the game against the Kentucky Wildcats in 2008.

The Louisville market has ranked first in ratings for the NCAA men’s basketball tournament every year since 1999. The Kentucky Wildcats also play an annual game in Freedom Hall, although attendance has declined steadily in recent years, with only 10,163 fans attending the 2008 game, only 54% of Freedom Hall’s capacity.

The Louisville Cardinals football team, which had produced talent like Johnny Unitas, Deion Branch, Sam Madison, David Akers and Ray Buchanan, achieved national respect in the 1990s under Coach Howard Schnellenberger when the team overwhelmingly defeated Alabama in the Fiesta Bowl. The program’s stock continued to rise as it joined the Big East Conference and won the FedEx Orange Bowl in 2007 under Bobby Petrino. The University of Louisville baseball team advanced to the College World Series in Omaha in 2007, as one of the final eight teams to compete for the national championship.

Louisville is also the home of Valhalla Golf Club, which hosted the 1996 and 2000 PGA Championships, the 2004 Senior PGA Championship, and the 2008 Ryder Cup. It is also home to Louisville Extreme Park, open since 2002, and which skateboarder Tony Hawk has called one of his top five skate parks.

If you answered yes to any of the above questions, you will need an event permit in the City of Louisville and EventPermits will facilitate all of your needs on your behalf.