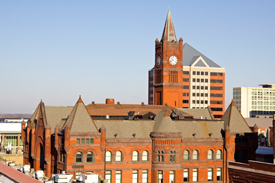 The Indianapolis Motor Speedway (IMS), located in Speedway, Indiana, is the site of the Indianapolis 500-Mile Race (also known as the Indy 500), an open-wheel automobile race held each Memorial Day weekend on a 2.5 mile (4 km) oval track. The Indy 500 is the largest single-day sporting event in the world, hosting more than 257,000 permanent seats and infield seating that raises capacity to an approximate 400,000, it is the largest and highest-capacity sporting facility in the world. The track is often referred to as the Brickyard, as it was paved with 3.2 million bricks shortly after its construction in 1909. Today the track is paved in asphalt although a section of bricks remains at the start/finish line.

From 2000 to 2007, IMS hosted the Formula One United States Grand Prix (USGP). Contract negotiations between the IMS and Formula One resulted in a discontinuation of the USGP at Indianapolis (at least for the foreseeable future).

Indianapolis is home to the largest mini-marathon (and eighth-largest running event) in America. 2007 was the 30th anniversary of the Mini, and run in the first weekend in May every year. This event is part of the 500 Festival, its 50th year running. The race starts on Washington Street just off Monument Circle and ends on New York Street back downtown. The Mini has been sold out every year, with well over 35,000 runners participating.

In addition, the headquarters of the National Collegiate Athletic Association (NCAA), the main governing body for U.S. collegiate sports, is located in Indianapolis, as is the National Federation of State High School Associations. Indianapolis is also home to the national offices of USA Gymnastics, USA Diving, US Synchronized Swimming, and USA Track & Field. Indianapolis also hosts the headquarters of the Horizon League and the Great Lakes Valley Conference; the Heartland Collegiate Athletic Conference is located in suburban Indianapolis. 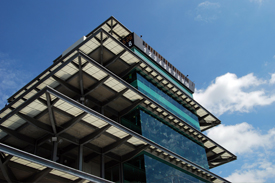 The city has hosted the Men’s and Women’s Final Fours (the semifinals and final of the NCAA basketball tournament) several times, and as of 2006 the NCAA is scheduled to hold the Women’s Final Four in Indianapolis at least once every five years. Conseco Fieldhouse in Indianapolis will host the Big Ten Tournament for five straight years (beginning in 2008) after it won the Big Ten bid over Chicago and the United Center.

Indianapolis also hosts the Indianapolis Tennis Championships, one of the many tournaments that are part of the US Open series.

Indianapolis will host the National FFA Convention from 2006-2012 and is one of two finalists for the convention from 2013-2019. FFA Convention draws approximately 55,000 attendees and has an estimated $30-$40 million direct visitor impact on the local economy. Attendees occupy 13,000 hotel rooms in 130 metro-area hotels on peak nights during the four-day convention, making it the largest convention in the history of Indianapolis.

Indianapolis has evolved into somewhat of a center for music. The city plays host to Drum Corps International, Music for All, Inergy, Indy’s Official Musical Ambassadors, the Percussive Arts Society, the International Violin Competition of Indianapolis, the American Pianists’ Association and Indy Jazz Festival.

The Circle City Classic is one of America’s top historically African-American college football games. This annual football game, held during the first weekend of October, is the showcase event of an entire weekend. The weekend is a celebration of cultural excellence and educational achievement while showcasing the spirit, energy and tradition of America’s historically black colleges and universities.

In 2003, Indianapolis began hosting Gen Con, the largest role-playing game convention in the nation (record attendance thus far being numbered in excess of 30,000), at the Indiana Convention Center. The convention center has also recently played host to such events as Star Wars Celebration II and III, which brought in Star Wars fans from around the world, including George Lucas. 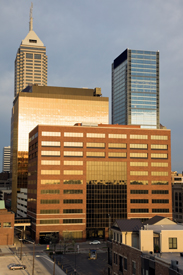 Indianapolis is home to Bands of America (BOA), a nationwide organization of high school marching, concert, and jazz bands, and hosts several BOA events annually. Indianapolis is now also the international headquarters of Drum Corps International, a professional drum and bugle corps association, and beginning in 2008 will host the DCI World Championships in the new Lucas Oil Stadium.

The Indy International Wine Competition, the largest U.S. wine competition outside of California, is held in Indianapolis every July at the Indiana State Fairgrounds. Several beer festivals are held in Indianapolis, the most notable of which is the annual Indiana Microbrewers Festival held in Optimist Park in Broad Ripple.

The city has a vibrant arts community that includes many fairs celebrating a wide variety of arts and crafts during the summer months. They include the Broad Ripple Art Fair, Talbot Street Art Fair, Carmel Arts Festival and the Penrod Art Fair.

Indianapolis contains the national headquarters for twenty-six fraternities and sororities. Many are congregated in the College Park area surrounding The Pyramids.

If you answered yes to any of the above questions, you will need an event permit in the City of Indianapolis and EventPermits will facilitate all of your needs on your behalf.