Chicago is host to many outdoor events on an annual basis. As you start the planning process, it is important to recognize that your event plays a unique part in the relationship with the community. A quality event can make a difference to the City of Chicago. EventPermits works with the City of Chicago and its partners, in planning safe and successful events that comply with city law. 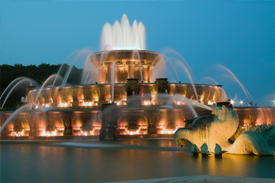 Chicago attracted a combined 44.2 million people in 2006 from around the nation and abroad. Upscale shopping along the Magnificent Mile, thousands of restaurants, as well as Chicago’s eminent architecture, continue to draw tourists. The city is the United States’ third-largest convention destination. Most conventions are held at McCormick Place, just south of Soldier Field. The historic Chicago Cultural Center (1897), originally serving as the Chicago Public Library, now houses the city’s Visitor Information Center, galleries, and exhibit halls. The ceiling of Preston Bradley Hall includes a 38-foot (11 m) Tiffany glass dome. Millennium Park, initially slated to be unveiled at the turn of the 21st century, and delayed for several years, sits on a deck built over a portion of the former Illinois Central rail yard. The park includes the reflective Cloud Gate sculpture (known locally as “The Bean”). A Millennium Park restaurant outdoor transforms into an ice rink in the winter. Two tall glass sculptures make up the Crown Fountain. The fountain’s two towers display visual effects from LED images of Chicagoans’ faces, with water spouting from their lips. Frank Gehry’s detailed stainless steel band shell Pritzker Pavilion, hosts the classical Grant Park Music Festival concert series. Behind the pavilion’s stage is the Harris Theater for Music and Dance, an indoor venue for mid-sized performing arts companies, including Chicago Opera Theater and Music of the Baroque.

In 1998, the city officially opened the Museum Campus, a 10-acre (4-ha) lakefront park surrounding three of the city’s main museums: the Adler Planetarium, the Field Museum of Natural History, and the Shedd Aquarium. The Museum Campus joins the southern section of Grant Park which includes the renowned Art Institute of Chicago. Buckingham Fountain anchors the downtown park along the lakefront. The Oriental Institute, part of the University of Chicago, has an extensive collection of ancient Egyptian and Near Eastern archaeological artifacts. Other museums and galleries in Chicago are the Chicago History Museum, DuSable Museum of African-American History, Museum of Contemporary Art, the Peggy Notebaert Nature Museum, the Polish Museum of America, Museum of Broadcast Communications and the Museum of Science and Industry. 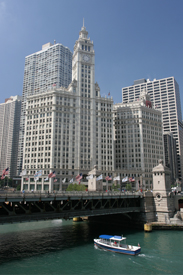 The Chicago Park District consists of 552 parks with over 7,300 acres (30 km) of municipal parkland as well as 33 sand beaches along Lake Michigan, nine museums, two world-class conservatories, 16 historic lagoons and 10 bird and wildlife gardens. Lincoln Park, the largest of these parks, has over 20 million visitors each year, making it second only to Central Park in New York City. Nine lakefront harbors located within a number of parks along the lakefront render the Chicago Park District the nation’s largest municipal harbor system. In addition to ongoing beautification and renewal projects for existing parks, a number of new parks have been added in recent years such as Ping Tom Memorial Park, DuSable Park and most notably Millennium Park. The wealth of greenspace afforded by Chicago’s parks is further augmented by the Cook County Forest Preserves, a network of open spaces containing forest, prairie, wetland, streams, and lakes that are set aside as natural areas which lie along the city’s periphery, home to both the Chicago Botanic Garden and Brookfield Zoo.

The city is home to two Major League Baseball teams: the Chicago Cubs of the National League play on the city’s North Side, in Wrigley Field, while the Chicago White Sox of the American League play in U.S. Cellular Field on the city’s South Side. Chicago is the only city in North America that has had more than one Major League Baseball franchise every year since the American League began in 1900. The Chicago Bears, one of the two remaining charter members of the NFL, have won thirteen NFL Championships. The other remaining charter franchise also started out in Chicago, the Chicago Cardinals, now the Arizona Cardinals . The Bears play their home games at Soldier Field on Chicago’s lakefront.

Due in large part to Michael Jordan, the Chicago Bulls of the NBA are one of the most recognized basketball teams in the world. With Jordan leading them, the Bulls took six NBA championships in eight seasons during the 1990s (only failing to do so in the two years of Jordan’s absence). The Chicago Blackhawks of the NHL, who began play in 1926 have won three Stanley Cups. The Blackhawks also hosted the 2008-2009 Winter Classic. Both the Bulls and Blackhawks play at the United Center on the Near West Side.

The Chicago Fire soccer club are members of Major League Soccer. The Fire have won one league and four US Open Cups since their inaugural season in 1998. In 2006, the club moved to its current home, Toyota Park, in suburban Bridgeview after playing its first eight seasons downtown at Soldier Field and at Cardinal Stadium in Naperville. The club is now the third professional soccer team to call Chicago home, the first two being the Chicago Sting of the NASL (and later the indoor team of the MISL); and the Chicago Power of the NPSL-AISA. The Chicago Rush, of the Arena Football League, The Chicago Bandits of the NPF and the Chicago Wolves, of the AHL, also play in Chicago; they both play at the Allstate Arena. The Chicago Sky of the WNBA, began play in 2006. The Sky’s home arena is the UIC Pavilion. The Chicago Slaughter of the CIFL began in 2006 and play at the Sears Centre. The Chicago Storm began play in 2004 in the MISL until 2007 when they moved to the XSL. The Chicago Storm also play at the Sears Centre.

If you answered yes to any of the above questions, you will need an event permit in the City of Chicago and EventPermits will facilitate all of your needs on your behalf.