Central Perk Pops Up in Soho for Friends 20th Anniversary

Permitting the most EPIC Pop-up store ever 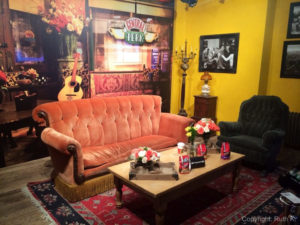 When you think about some of the most impressive pop-up store activations, what comes to mind? For me, I can’t help but think about the Friends 20th Anniversary Central Perk Coffee Shop in SoHo, NYC.

When Warner Brothers wanted to celebrate the 20th anniversary of NBC’s “must see TV” line-up, they looked to our longtime experiential agency client, Source Marketing. Our friends at Source immediately turned to our experienced team to handle all of the permitting and security components.

The month-long activation drew in a line of eager coffee drinkers that stretched out over three city blocks each day. Fans came from near and far to sip on the Central Perk Roast blend from Eight O’Clock Coffee. In collaboration with Warner Brothers, Eight O’Clock also sponsored the pop-up.

Upon entering the Central Perk “experience,” there were tons of social media and photo opportunities. The interior included a working coffee bar, the cast wardrobe, props from the show, and of course, the famous orange couch.

In addition, the merchandise counter offered memorabilia for purchase from the show, including bags of the special Central Perk Roast blend.

Special events were held at the Central Perk shop throughout the month-long activation. Highlights included musical performances by The Rembrandts (Friends theme song artists), as well as Grammy-winning artist Colbie Caillat. In addition, a special guest appearance was made by James Michael Tyler (Gunther from Friends).

The in-store music playing in the Central Perk pop-up included all of the greatest hits from the classic TV series, including Phoebe’s very own “Smelly Cat!”

All in all, Warner Brothers estimated that the hard work from our client, Source Marketing, was responsible for over 1.6 billion earned media impressions!

Some of our other pop-up store execution highlights and links: