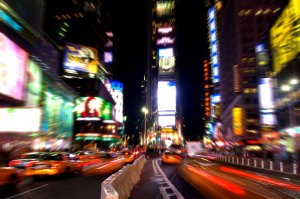 EventPermits recently secured several permits that allowed a wildly popular online role-playing war game to promote a new expansion pack. The event, which took place November 11-12, was the online game’s attempt to boost its marketing efforts in a creative and relevant manner.

In honor of the online war game’s most popular weapon, a taxicab was placed in the middle of Times Square in New York City with an axe impaled in its roof. The axe is an exact replica of the weapon used by many players in the game’s online world. The game, which was created more than ten years ago, has more than 10 million avid and passionate subscribers who were thrilled with the display.

Classified as a massively multiplayer online role-playing game, or MMORPG, these types of web-browser based games enable a substantial amount of players to interact with each other inside of a virtual world. In successful role-playing games, users are capable of becoming a character in a fantasy world and assuming control of that character’s actions, words, decisions and more. Users who play in the online gaming world are required to pay a small fee, which has provided MMORPG companies with billions of dollars in worldwide revenue.

In the fifth expansion of this game, players were introduced to an increase in the amount of levels, fresh zones and also new character models. The expansion has received many favorable reviews from video game critics and currently has a rating of 85 on Metacritic.

The official release date of the expansion was on November 13, 2014 at midnight. The event garnered massive amounts of attention and was considered a huge success.