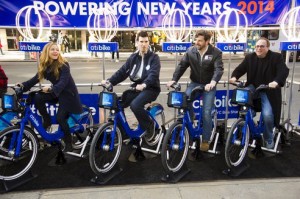 The Times Square Ball weighs 11,875 pounds and features 32,000 LED lights. It requires 50,000 watts of power for the entire NYE event — some of which was provided this year by active New Yorkers in Times Square. Six stationary Citi Bikes were posted on the corner of 7th Avenue and 42nd Street on December 28, 29 and 30 for passers-by to pedal. The bikes were hooked up to 75-watt hour dynamometer generators that collected the energy generating from pedaling which ultimately powered the Times Square Ball.

The bikes were also rigged with a small computer to track the watts that were generated by pedaling participants. Most people pedaled for one to five minutes, generating anywhere from one to five watts of power. The longer they pedaled, the more power was produced and saved for the New Year’s Eve ball drop. Power generated from the bikes was stored in 12-volt batteries.

Citi Bike is a bike sharing system operated by NYC Bike Share and sponsored by Citi Bank. Bikes are available all day, every day. They are locked into a network of stations around the city; they can be rented from and returned to any station in the system. The power bikes used in this event were stationary versions and were models refurbished after Hurricane Sandy.

For this event, we secured the activity permit and contracted security services from Marty Barnes Security. Citi Bank teamed up with Times Square Alliance, Countdown Entertainment and agency Pierce Promotions to highlight the sustainability and green initiatives in NYC.