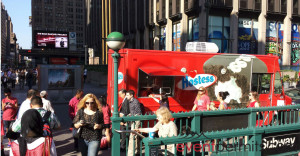 We have been working on a very exciting branding campaign for Hostess this month to celebrate the return of Twinkies to stores! To assist Hostess with this exciting event, we have developed a food truck tour, bringing samples of the new Twinkies to major U.S. cities. So far, we have held events at two locations in New York City, including one in Penn Station, and in Tribune Plaza in Chicago. Later this month, we will be bringing the tour to Los Angeles, and the campaign has been so successful that Hostess has recently decided to extend the tour to include even more locations and dates!

The Twinkies relaunching campaign marks a big moment in the Hostess history, as they work to rebrand their company and reintroduce Twinkies and the rest of their snacks back into stores nationwide. The branding campaign features a food truck that brings the iconic American snacks to the streets of each city, as well as a meet and greet with the Twinkies mascot, Twinkie the Kid. Additionally, passersby and participants in the festivities can also receive a Twinkies t-shirt.

EventPermits has assisted with the Twinkies branding campaign by working with the city governments to secure the health permit needed to hand out samples and to secure the activity permit for the 22-foot step van. Additionally, EventPermits coordinated brand ambassadors as well as security for the event, which was provided by Marty Barnes Security.

We are very happy to be able to work with Twinkies on this event. Every stop on the tour has garnered a lot of attention, which tells us just how happy people are about the return of Twinkies! The tour has received nationwide attention, and we are very excited to continue working on it! Keep an eye on our Facebook page to see where we will be next!