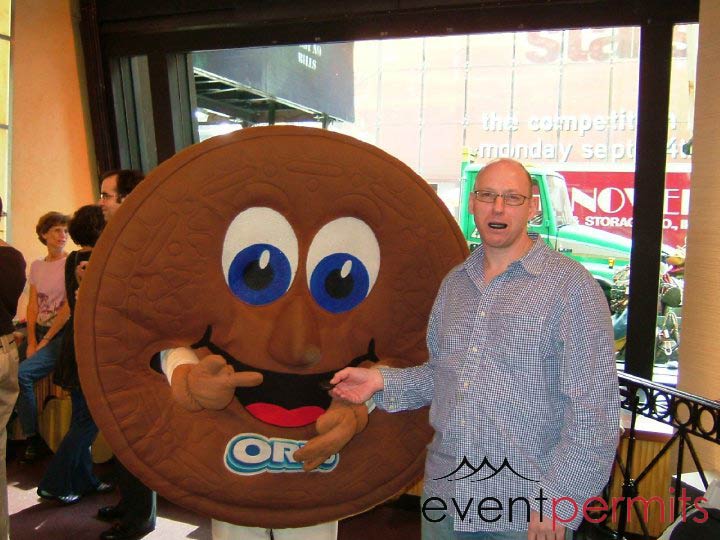 On October 2, Kraft Foods, the maker of beloved sandwich cookies Oreos, celebrated the brand’s 100-year anniversary live in Times Square. The event concluded a 100-day advertising campaign called Daily Twist, a riff on the “twist, lick and dunk” Oreo-eating ritual. Oreo introduced a new, stylized cookie each day on a dedicated website, as well as on the brand’s Facebook and Twitter accounts. Each daily image focused on a current-events story.

EventPermits assisted Oreo (formerly under the Kraft Foods umbrella of brands) and the newly-formed Mondelez Foods, along with their integrated agency teams including DraftFCB, 360i and MediaVest, to secure all necessary permits to secure and support a temporary, pop-up NYC advertising agency board room, created in the style of the popular MadMen TV show, and dropped it smack in the heart of Times Square at 46th Street and Broadway. On October 2, Oreo fans submitted suggestions for the final Daily Twist in person or via social media. These suggestions were displayed live on a large, digital Oreo billboard. Fans voted for their favorites and the pop-up agency then sketched ads live within hours. Digital Domination LLC, through its TimesSquareDomination division, worked with MediaVest to secure the American Eagle sign as Oreo’s temporary OOH digital sign for this event. EventPermits secured proper permitting for space for the glass-paneled advertising agency. The temporary building is also considered a pop up store. EventPermits was thrilled to help Oreo’s achieve a new twist in Times Square, New York City.