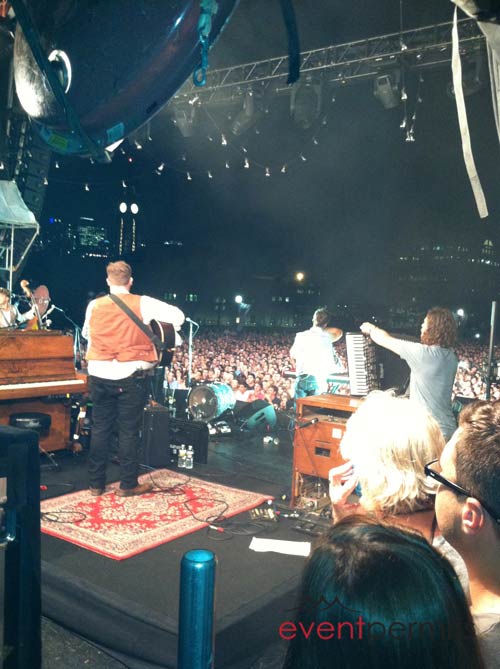 EventPermits assisted in the permitting process for a trailblazing concert event, a first ever of this magnitude, at Pier A Park in Hoboken, NJ. On the first day of August, Hoboken welcomed the Grammy nominated and Billboard Music Award winning English folk-rock musical group, Mumford & Sons, to launch their national tour of 15 cities (16 concerts). EventPermits worked with The Bowery Presents, This Is It! Stageworks of Hoboken, and City Officials to assemble a concert event that Hoboken has not seen until now. The mellow rock band drew a sellout crowd of 15,000 people. With a great performance by the London based musicians, the real takeaway from Wednesday night’s concert is that not only is an event this size fathomable for Hoboken to host, but it was a smashing success. This comes as great news for the concertgoers of Hoboken, New York City and EventPermits to hopefully bring in similar acts for the future.

Permitting for the Mumford & Sons event was an undertaking that EventPermits was excited to tackle. The company’s responsibilities for the event included permits and agreements from Public Safety, Parking, Transportation, Maintenance/Engineering, Department of Buildings, NJ State Alcohol & Beverage Control, NJ Transit/PATH approvals, Hoboken Fire Department for generators and open flame/sterno permits, as well as a three minute fireworks extravaganza at the show’s conclusion. Permitting of the stage required Coast Guard involvement as the stage floated down the Hudson River on a barge and was craned onto Pier A days leading up to the show.  The assembly of the structure was an especially impressive spectacle as This Is It! Stageworks had maneuvered the massive configuration into place. EventPermits is hopeful to be involved in future events that require permitting on Pier A due to the positive response from the concertgoers along with the City of Hoboken. Pictures of the thrilling show in addition to the shows set-up can be found at EventPermits’ Twitter and Facebook pages.

Stage: This Is It! Stageworks