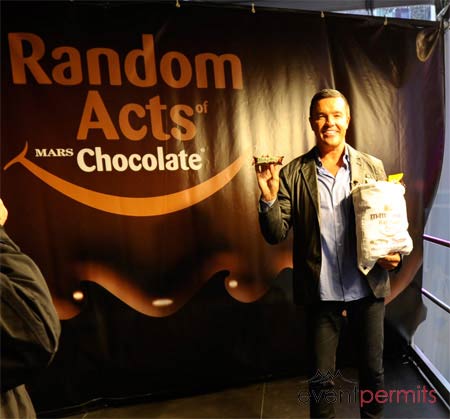 During this past summer, on September 6th, 2011, celebrity Michael Maloney from Extreme Makeover: Home Edition helped launch a day of kindness for thousands of New Yorkers and tourists alike. The shared goal was to launch a Mars® branded day, “Random Acts of Chocolate,” by distributing 50,000 of the company’s full-sized, famous brand bars and candies such as M&M’s®, Snickers®, 3 Musketeers®, Milky Way® and Twix®.

Even before the program started, Michael Maloney and a Mars® VIP spokesperson were in a greenroom conducting interviews for this launch with various media outlets both national and local. In addition to the interviews, EventPermits assisted WS and Mars® with targeted, localized outreach. Random Acts of Chocolate was included in the Times Square Event Calendar, Times Square/midtown neighborhood e-mail blast, TimesSquareNYC Facebook page and Twitter feed which combined has a following of nearly 375,000 people. This included banner ads, live social mentions and links for the program.

Businesses and residents in Manhattan who tweeted #RandomActsofChocolate received chocolate bars for themselves and their friends. We were able to create a “mission control” hub where staffers who were stationed at the helm of the command center monitored the social feeds on twitter and dispatched the bikers out to different locations around NYC. Through fameagency we were able to provide 30 models and of those 25 were posing as bike messengers complete with helmet cams and their own bicycles. This Is It! Stageworks delivered their SL100 mobile stage onto Military Island decked out in full Mars® branding, laptops and flat screen televisions. Our collective team coordinated hundreds of deliveries and sampling throughout the day and before we knew it, Michael Maloney was on the stage distributing chocolates to the crowd himself!

EventPermits acquired Military Island, as well as additional New York City permits such as: health permits, parking for the satellite/uplink vehicle and finally the refrigeration truck, to keep the chocolate melting in your mouth, instead of your hand.