A Block of Bananas on Broadway 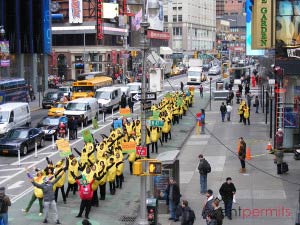 EventPermits kicked off the 2012 New Year in Times Square in true Broadway spirit, with a full city block of costumed dancing bananas. Teaming up with Jamba Juice and Attack! Marketing,

EventPermits celebrated Jamba Juices’ ringing of the Opening Bell at NASDAQ in Times Square, NYC on Friday, January 6th. While the Opening Bell ceremonies were taking place inside, over 100 dancing bananas turned up the “juice” outside of NASDAQ, as New Yorkers and tourists stopped to watch the Flash Mob of life-sized, costumed bananas dance their way through the Broadway Pedestrian Plazas and Military Island.

After the opening bell was rung, the Jamba Juice banana Flash Mob made its way through Times Square to the shake maker’s flagship store, its Broadway location between 47th and 48th streets, adjacent to Duffy Square. After a brief warm-up, the bananas were back at it again, spreading out and dancing throughout the entire permitted NYC block.