UniQlo is Popping Up in NYC…Literally! 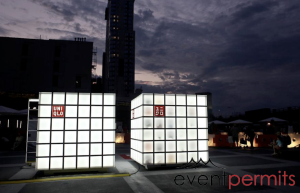 As part of the EventPermits team, I helped execute one of our most exciting string of events for our client, Neverstop, on behalf of their client UniQlo.

UniQlo is a Japanese company that sells casual clothing for both men and women. Through our years of experience and relationships, our EventPermits team negotiated with various New York City agencies to execute partial production of, and permit the events for UniQlo’s Cube Pop-Up Stores from October 10th through the13th (5th Avenue and 53rd Street), October 10th through the16th (7th Avenue between 31st and 33rd) and UniQlo’s store opening on October 21, 2011.

The UniQlo store opening took place in NYC at their 34th Street location. We were also able to place amazing Pop-Up Stores in the form of cubes, which held clothing for people to try on over multiple days leading up to the store launch. The events attracted thousands of people with its Grand Opening and Pop-up Stores / Cubes that had been strategically placed around NYC. People were having a great time taking pictures in front of the Pop-up Stores / Cubes, trying on UniQlo’s clothing, standing in line to witness the 34th Street Storefront Grand Opening as well as the spectacle of events that happened within the store and finally taking part of the amazing deals that day.

Our EventPermits team was able to secure the city permits for the event, barricades permits, generator permits and had approvals for sound permits, which we later chose not to activate. The Pop-up Stores / Cubes were also in need of resale permits, which we were able to obtain so that UniQlo could sell its clothing on the spot for customers who were too excited to wait until the store opened. We cut through the red tape of the city bureaucracy to help our clients achieve their goals in exposure and sales and to turn their concepts into a successful event.